Even as the bus was moving slowly on the tarmac towards the aircraft, it all seemed a dream for me. I would actually be taking the flight to head back home after a long four days that included a road trip from Delhi to Chandigarh, Jalandhar and Amritsar and back to Delhi - a distance of over 900 kms covered in less than 60 hours. The car journey was indeed tiresome and the trip was hectic but the wish-list was complete - A visit to the Golden Temple, the Wagah Border, Wal-Mart stores in Punjab and a couple of other meetings. All those memories were coming back to my mind as the bus slowly halted. There were just five of us in the long bus operated by India’s most efficient airline, Jet Airways as most of them were already seated and their seat-belts fastened. Usually the late comers are welcomed with a stiff and dirty look by some passengers as though the flight was held up only because of them (which was not in our case). The crew, ever smiling and happy to help, guided us to our seats and the doors were being closed, the flight getting ready for take-off. As the plane reached the runway and started moving, I was amused that this could actually happen to me – reaching the airport 14 minutes before the scheduled departure time and still being flown. Yes, I reached at 18.31 hrs. at the Terminal 1D at Delhi Airport for a flight that was scheduled to depart at 18.45 hrs. Even the lady at the check-in was amused of my (in)sanity and reassured – that she wouldn’t be responsible if I couldn’t board the craft. I have held faith in miracles and one such happened that day.
Since I had already done a web-check the previous day, all I needed to do was carry a print out to show the Security staff and run to the boarding gates. The usually unfriendly and rude staff of CISF at Delhi Airport was, for a change nice and polite and let me past the security gates, while also advising that I need to really rush as the flight’s about to take off. Even as I approached the waiting area, my name along with a few others were being screamed on the Public Address systems and I had to run across the 2,000 sqm terminal building to reach the boarding gates. Just that I was feeling a bit guilty that I wasn’t taking anything back for my family or friends from the sprawling Retail areas. What was reassuring was that there was an all-purpose retail outlet at the Arrival areas at Bangalore International Airport, managed by India’s leading Leisure Retailer Odyssey that stocks everything from toys to chocolates, books to music. So I didn’t have to worry much since I could pick it up after reaching Bangalore. 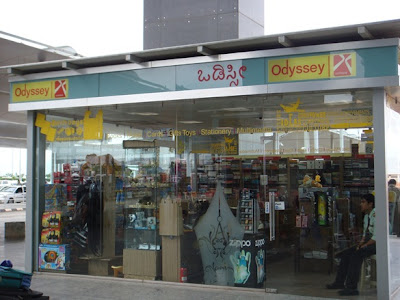 While my getting into the flight was indeed some kind of magic, it was an eye-opener and warning, given the new guidelines laid down by many of the airlines in conjunction with the airports – Check-In counters for Domestic Flights would close 45 minutes prior to scheduled departure (previously 30 minutes) and 75 minutes prior for International flights and this would be applicable at the top six airports by passenger volumes in India including Mumbai, Delhi, Chennai, Bangalore, Kolkata and Hyderabad. This means one wouldn’t be able to check-in at the airport after the counters close, but could still board the flight if check-in has already been done though telephone or on the Web well in advance. Over a period of time, this trend would result in passengers arriving early to the airport, like how they do at other points of transit such as Railway stations and Bus stands. Earlier, the airports were smaller and cramped, but all this changed with the Government allowing private participation in constructing new infrastructure at airports. Bangalore International Airport was the first one to be signed on paper although Hyderabad International Airport was the first to commence its Greenfield Airport in 2008. GVK managed Mumbai International Airport had its new terminal building inaugurated a few months ago and GMR operated Delhi International Airport has recently commenced India’s pride, Terminal 3, or T3 as it is fondly called. Other airports at Chennai, Kolkata, Mangalore, Ahmadabad and many others managed by Airports Authority of India are being modernised at a total cost of over USD 4 Billion. 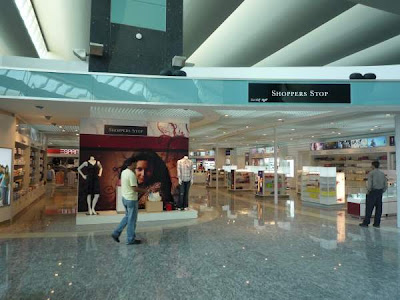 While arriving at the airport was not seen as a major attraction a few years ago, today passengers seem to love it. For Example, Cafe Coffee Day, the first national Retail Brand to enter airports many years ago had its share of patrons arriving at the erstwhile HAL Airport in Bangalore only to sip a cup of hot coffee before they left the city which they do even today at the new airport. Currently, CCD operates over 30 outlets across leading airports in India and is planning to enter many more in the years to come. The Bangalore International Airport was the first one in the country to have a properly planned and well-managed Retail footprint, led by India’s largest retailer in the lifestyle business, viz. Shoppers Stop which also incidentally operates at Hyderabad Airport. T3 at Delhi has over 20,000 sqm of Retail areas and hosts leading domestic, regional and international brands alike across domestic & International Departure and Arrival areas. It is quite common to see passengers packing sandwiches or burgers from CCD outlets along with a cold coffee or a frappe or Pizzas & Pepsi from Pizza Hut outlets at various airport terminals, thanks to the advent of low-cost airlines (which command a 35% market share in the Indian skies) that do not serve complimentary meals on board. 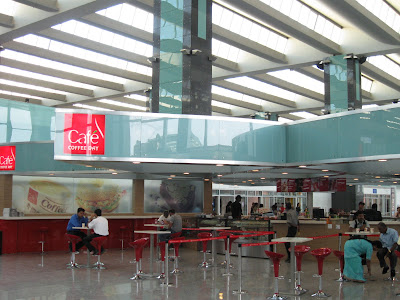 While arriving early to shop at Duty Free areas in the International Departures is common worldwide, the trend was basic and functional many years ago which was again altered at the Bangalore International Airport which hosts one of the best collections of Scotch, Tobacco, perfumes & cosmetics, Electronics etc. This is the airport where leading city-side retailers such as Odyssey Books and Leisure, Ethos Swiss Watch studio and fashion designer Deepika Govind started their airport retail journey. Today, Odyssey aand Ethos have mastered the trade and operate at many other airports while planning for more stores in times to come.

There are indeed many advantages for passengers to shop at airports. To begin with, it’s a lot of time saved for business passengers and busy executives, compared to that at the over-crowded malls in the city where entering and exiting could take more than 20 minutes during the weekends. Since these store understand the pulse of their customers, they stock the right kind of products so the decision making is quicker. Most importantly, these outlets offer a value-addition to their customers by bundling various promotions – afterall, the passenger doesn’t and cannot come every day to the airport! F&B operators focus on speed of delivery and high quality products and even offer tamper-proof packing so that there is no spill over even if it were to be consumed 20,000 ft above sea level. They also offer a wide assortment which caters to the millions of travellers who could never get bored of the offering.

So, if you are travelling through an airport next time, reach early. You might be in for a surprise looking at what’s available at the airport. Needless to say, the writer is not responsible if you exceed the limits on your credit card. Happy Shopping & Dining!
Posted by Shriram, The Retailer at 20:46