Retail staffing has a long way to go!

It was rather annoying that I didn’t get a refill lead for my Mont Blanc Pencil at the flagship store of the brand at the iconic UB City in Bangalore. The Sales staff, who was amicable and friendly ensured that the Mont Blanc service levels (as is globally) are maintained. What she didn’t do (and possibly, inadvertently) was accuracy of her technical skills. When I visited the store again the next day, another staff who was equally amicable and friendly explained that there were already spare leads within the writing instrument and that there was a mechanical issue due to which it wasn’t working properly. After a few permutation and combinations, he somehow managed to make it work! Well, I was impressed that my pencil was working normally but certainly not about the service levels at a store of one of the most respected brands in the world. In both the cases, there were no efforts made by the staff to show something new within the store – the interactions revolved around just fixing the problem rather being engaging or exhaustive.

A few days ago, we went for dinner in a large group to a reputed restaurant in town, named Aangan. I believe they have a few branches across the city and was proven to be a good place all along. even as we were walking towards the store, what I saw from outside made me a bit confused – such a respected restaurant was running fans instead of air-conditioning! Yes, I agree the weather outside is rather pleasant but the overall ambience inside wasn’t so, with all the odour of food. We placed the order and were sipping our soup and the staff was already there with the main course – rotis, dal, etc. When I questioned what was the hurry, the staff replied (but politely), that “the food was already prepared”. Then a senior guy came across and took the food back (though not to the kitchen but to another table!). 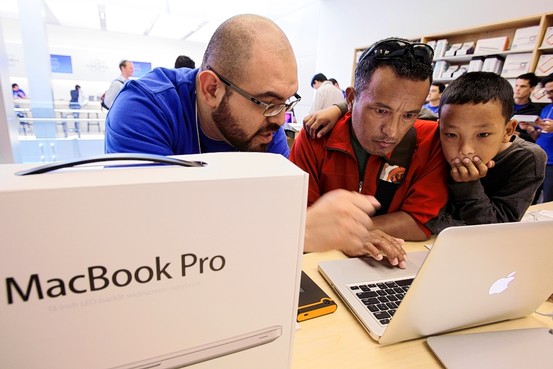 Now let me compare these with an example of extraordinary product / service orientation by Retail Sales staff.

WSJ.com recently carried an interesting article on how Apple has ensured highest levels of customer service at its flagship stores. More people now visit Apple's 326 stores in a single quarter than the 60 million who visited Walt Disney Co.'s four biggest theme parks last year, according to data from Apple and the Themed Entertainment Association. Apple's annual retail sales per square foot have soared to $4,406—excluding online sales, according to investment bank Needham & Co. Add in online sales, which include iTunes, and the number jumps to $5,914. That's far higher than the sales per square foot and online sales of jeweler Tiffany & Co. ($3,070), luxury retailer Coach Inc. ($1,776), and electronics retailer Best Buy Co. ($880), according to estimates. According to several employees and training manuals, sales associates are taught an unusual sales philosophy: not to sell, but rather to help customers solve problems.

Retail staffing is one of the most complex challenges that Indian Retailers have been facing over the years. My first employer, RPG Retail had set-up RIRM – RPG Institute of Retail Management, an inhouse training & development agency in which I was a Certified Trainer. The HR Team would scout for talent from government schools and recruit them as trainees – they would be provided class room training initially and later, on-the-job training at one of its Foodworld, Musicworld and Health & Glow stores. In addition to this, they would be given a Certificate after a 6 month period of experience and a job offer to join as a full time employee. The success rate used to be over 80%, thanks to the reasonably lucrative and respectful employment that the trainees used to get. Over a period of time, they were “ready to poach” variety for newer Retailers who entered the market. Most Retailers in India today have a Training & Development Department but it’s quite a challenge to retain front-end employees especially, thanks to the lure for a small hike in salary! Most of them do not have long-term goals and hence keep jumping jobs, partially for the sake of salary and partially for other conveniences – such as proximity to their residence, designation, and not to mention shorter working hours or lower work-load.

Thankfully, Indian customers at the moment are not as demanding as their western counterparts, but it is just a matter of time that they too shall be demanding superior product knowledge and high levels of customer service – from boutique stores to hypermarkets. Needless to say, retail employees would also understand this themselves, with personal experiences. More than the employers’ interest, I foresee employees (in the front-end) taking a lot more interest in training themselves – for their own long-term success and existence!

Posted by Shriram, The Retailer at 18:46