6/10 was not the best date: #BigBillionDay

I have been keenly watching the proposed #BigBillionDay of Flipkart for quite some time. There has already been much written about the negative customer experience they created on this day and how competition took advantage of this – by offering products at a much lower price (note: I didn’t say “cheaper” and shall come back to it). Apparently, the Bansals chose 6/10 as the day since it was also the house number where they started their business a couple of years back. I found this to be a weird coincidence, honestly no offence meant. This is that time of the year when the Retail Industry sees a surge in sales – for big consumer brands such as the ones in Consumer Durables and Electronics, Apparel and Watches, the 3rd Quarter of the Financial Year beginning Oct-Dec. contributes almost 40-50% of their annual sales. Brands and Retailers have taken advantage of this proposition during this period, thanks to the biggest festival of the country, Diwali, Id and Christmas which fall during these months. Salman, Shah Rukh, Aamir and all other leading actors of the country plan their movie releases during this time of the year hoping to see a massive box-office opening. In general, people tend to save all through the year only to spend during this time – from cars to bikes to all kinds of shopping, consumers go easy during their respective festival times. 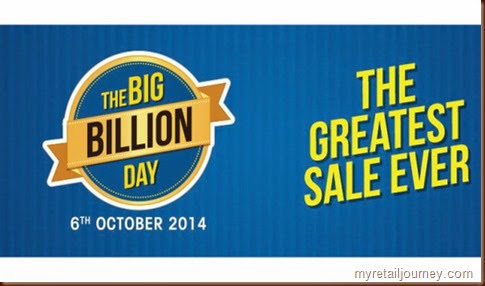 Am sure the Bansals knew this. Or probably not, I wonder. Why would a Retailer, online or offline discount their products during festive season when consumers are anyway going to spend? They would rather increase the bill values and promote big ticket items to cash in on the popularity of the festive mood. While offline Retailers do pass on a benefit to the consumers, it is mostly in the form of a freebie – a gift article or perhaps a Gift Voucher, so as to enable the customer to come back to them again. I have been witnessing over the past few days, full page advertisements by leading brands such as Samsung, Sony, Panasonic etc. about their latest LCD and LED TVs. The screen size seems to be getting bigger while the Selling Price has remained the same or has rather reduced considerably compared to the past few years.

In my humble opinion, Flipkart should not have undertaken this activity during this time. Atleast, they should have refrained with those massive discounts, notwithstanding the fact that the offers advertised didn’t match with what curious e-customers found, apart from the error pages. There was much angst by the public who took to social media sites like twitter and facebook – some published long blogs while many were content with the 140 characters to display their frustration and rejection of the idea of Big Billion Day. I will not get into the mechanics of the promotion, would rather reserve it as a case for another day. 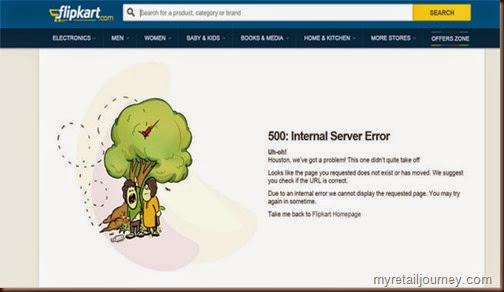 Simply put, the festive season is not for discounting. I find it weird that the Bansals have given an explanation such as the one above for the date that was chosen. We in India, generally like to ape the West mindlessly. The Black Friday Sales that happen in the US is at the end of the year who follow the calendar year to close their books of records. What is given on discount are the older models ahead of new launches starting the New Year. Some intelligent geek who would have shopped in the US during one such sale might have pondered this idea during one of their internal meetings and bingo! The Flipkart Team took it too seriously! From a pure Retail Marketing point of view, I think this is one of the most disastrous campaigns that would remain etched in the memory of consumers and marketers. Many Brands and Retailers have been taken by surprise that Flipkart sold the products at a lower price than what they had offered, sometime even lower than cost. To the astonishment of the Consumer Products Industry, Flipkart claims to be the guiding institute for developing the E-Commerce Industry in the country.

While I do appreciate what they been championing, the method undertaken is not appropriate. E-Commerce shopping in India means Discount Shopping, to the extent that people do not see it as a convenient alternate method for shopping at all. In the process, Flipkart has distanced itself further from fellow Retailers and e-Tailers. It would have helped if this activity was conducted in February, which is one of the leanest months for consumption. Hope they take note of this and plan their marketing better in future.

Posted by Shriram, The Retailer at 19:33