Savings! In the heart of the city... 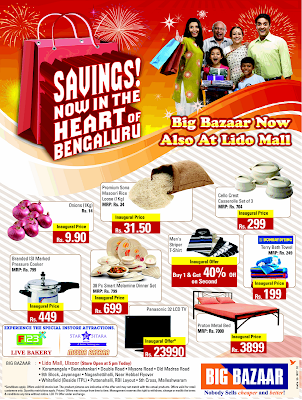 I was quite intrigued when I first heard of this, but then came to terms. It was about a month back when I first heard that the erstwhile Lido Mall would be reconverted into a Big Bazaar. While Lido Cinema, one of the oldest landmarks in Bangalore was brought down to give way for two new unique landmarks, Ista hotel and Lido Mall four years ago, it was quite a shock that the Mall was getting dismantled. But that’s better than running a Mall without footfalls. The Mall, among the many that are being managed by an arm of The Future Group housed International Fashion Labels such as Next, Guess and Etam apart from a spacious Pantaloons Fashion store, Body Shop, Lee Cooper, Marks and Spencer, etc. Cafe Coffee Day, which occupies the ground floor corner was a saving grace to the mall which has only seen footfalls dropping over the years, thanks to the ongoing construction work of Bangalore Metro Rail project. The block on the opposite side has a McDonalds on the Ground Floor along with the Box Office of Fame Cinemas, which partnered with Lido to manage the multiplex spread over the top floors. The Mall was actually very convenient, the only one so to say in the “MG Road” vicinity. In fact the Cinema runs to full capacity during the first weekend of new movies and apparently, night shows have higher occupancy than day shows, thanks to its prime location which is accessible quite easily within 8-10 km radius as well as for office-goers in the CBD area. 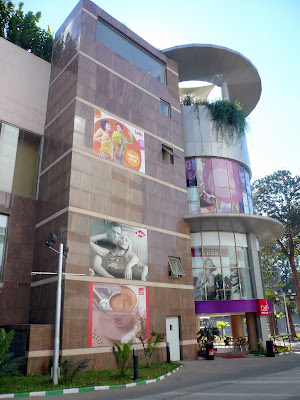 I did see the signage of Big Bazaar coming up a few days ago outside the Mall and the Newspaper Advert recently pulled me into the store, for my love of Retailing. I never imagined that an operational Mall could be put to good use; better use rather by converting it into a Hyperstore (or whatever one may want to call BB as). While Cafe Coffee Day still retains its location and I would believe would perform better with a stronger anchor in BB, all other tenants have been dismantled. The main structure remains as is; the escalators and elevators that were used earlier by the countable walk-ins now transport busy shoppers and their families up and down, albeit both transporting-equipments are not best suited for the shopping trolley – wielding consumers at a Hyper. The main signage outside has indeed changed, or rather elongated as “Lido Big Bazaar” - Honestly, looks nice. The tiles that were used earlier for International fashion concepts are now being used to sell private label grocery and electronics, Chinese-imported furniture and clothes! Well. 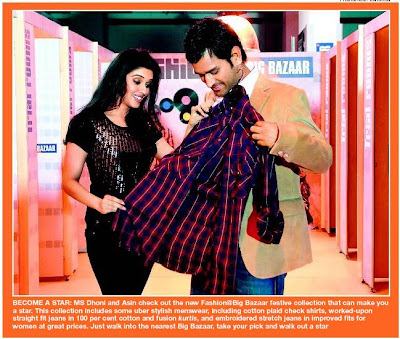 The Ground floor, which was reserved for parking remains so, while the First floor houses Food Bazaar, Furniture Bazaar and Electronics Bazaar. So, it’s a no-shocker to see Plasma and LCD Tvs next to household items and Deodorants. The planners have indeed done their best although a bit more adjacency planning would have helped. The second floor houses Fashion Bazaar – a street fashion concept that is being popularised using youth icons – Cricketer MS Dhoni and Actor Asin. Apparently, they are among the two icons who relate the most to the trendy youth today, almost a boy/girl next door positioning created deftly by agencies and their brands. F123, a gaming zone that is gaining popularity quietly across the various formats in the group sits in a corner while Musicworld with two gondolas serves the latest as well as evergreen hits. No eating joints as such, which would have certainly done very well, just a counter that sells street snacks. Call it coincidence; the guy behind the counter was conversing comfortably with two different couples in Bengali. Strange, yet true. Just when I realised that the music that was being played in the background was in Hindi, not in Kannada (the vernacular in the city). Does it matter so much? Well, yes to some extent. Retail is all about regionalising – as I always love to say, Think Global, Act Local, and Retail Regional. 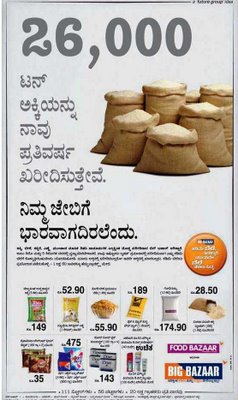 While Big Bazaar has been communicating and advertising within and outside the store in the vernacular languages across the country, it is indeed important to maintain the connect while the shopper steps into the store. Not just the music or communication, but some local QSR would have complemented the shopping experience too. There are enough and many who are awaiting a chance to serve within the store and that’s probably the opportunity for all the three, the Hyper, the local caterer and the customer. After all, the shopper has just walked off from her favourite neighbourhood grocer to the swanky a/c shop! Overall, it was great to see the giant in the middle of the city. The promise, of Savings in the Heart of the City seems to be a big one though. Time will tell and I will live that day to see it firsthand and write about it again. Long Live the Indian Consumer. Long Live Indian Retailing. 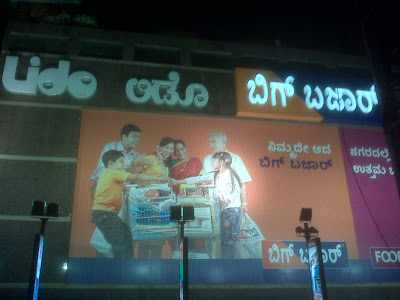