Much ado about nothing...

It is quite common to see radically minded political parties create ruckus during cultural celebrations such as Valentine’s Day, Friendship Day, etc. citing them as western concepts which India can do without. Although most of them forget that ours is a Democracy and one is free to live the way they want to, provided they fall within the legal purview of our constitution. Retailers had initially taken advantage of such events, creating a lot of hype around and managing to attract customers. While the trend still continues, many of them have toned down the way it is celebrated and have started focussing on other days of national importance. In Western countries where Organized Retail has evolved much, Mother’s Day, Father’s Day and even Thanksgiving are celebrated with glee and harmony. In India, while we have been celebrating Children’s Day (birthday of former and first Prime Minister, Jawaharlal Nehru), Teacher’s Day (birthday of freedom fighter and academician, Dr. S. Radhakrishnan) and regional festivals like Akshaya Trithiya (most auspicious day to buy gold), Raksha Bandhan (sibling’s day) and Karva Chouth (prayers for the husband) for many decades now, Independence Day and Republic Day are celebrated since 1947 and 1951 respectively, ever after achieving Independence from the British Rule and since becoming a republic country. Although earlier, these days were usually celebrated with national fervour and devotion, they have been converted into social events which also include personal and family celebrations, since they are usually preceded or succeeded by a weekend. 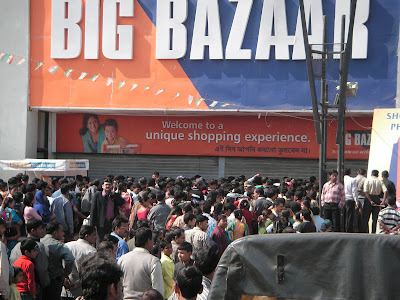 Sensing an opportunity, one of the first retailer in the country to take advantage was The Future Group. Way back in 2004, the company which operates the largest Hypermarket chain under the trade name “Big Bazaar” created a unique concept “Sabse Sasta Teen Din”, which translated into English means “the cheapest three days”. When they first experimented this concept on 26th January, India’s Republic Day which also happens to be a National Holiday, the queue outside the store located at Lower Parel in downtown Mumbai was miles long and the store had to be shut for a few hours to ensure safe exit of those who had already walked into the store! Ever since, there was no looking back. Founder & CEO Kishore Biyani who is known as the pioneer of Organized Modern Retail in India has experimented more and more – a mantra that he and his company lives by. The three days became longer and usually were tagged to the closest weekend and over a period of time, more such events were created. As always, many others in the business followed suit and started following their own trends – creating marketing concepts that suited their respective business models. 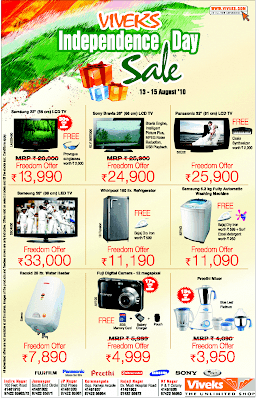 2010 was a bit special though. To celebrate the 63rd Independence Day on 15th Aug., almost all the large Retail players in India attempted such a concept in their own way. Newspapers were abuzz with articles, write-ups, advertorials and full-page advertisements. Needless to say, news publishing houses would have cashed in on this opportunity; after all, they have been quite starved over the past two years with minimal ads by Retailers who pulled back their spending after the global recession which impacted Indian consumers more psychologically than financially. The message from players across product categories ranging from apparel to electronics, grocery to home furnishing was loud and clear – discounts ranging from 10-60% over the weekend. The hype was carefully built-up over a period of time and the buzz in the minds of shoppers was clear – visit the stores at the earliest and get the best out of the season. Erstwhile popular but now dormant retailers like Viveks, one of the oldest and trusted electronics dealers with a strong presence in South India bounced back with amazing offers. In fact, this was the very place where my parents purchased our first prized possession, a Crown Colour Tv in 1981 at a nondescript location called Luz Corner in Madras, (now known as Chennai). Over the weekend, my mother went there again, this time to buy a Microwave Oven, a reasonably new gadget in the life of Indian homemakers that promises comfortable yet delicious cooking. Well, she visited the store for just one reason – her trust in the brand “Viveks” continues to remain strong, where almost all our household items have been purchased for the past three decades. 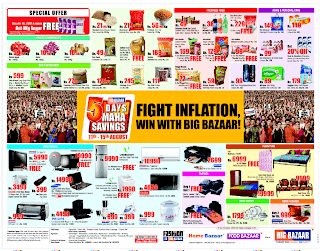 One of the most exciting concepts created this year was again from Big Bazaar, aptly titled “war on inflation” – helping housewives to fight the price rise in the economy. While everyone from the Prime Minister to my car driver have been talking about the rise in prices of essential commodities and the measures that must be taken to curb them, The Future Group was the first one to create an impact. It has been running various campaigns in the media, highlighting the fact how Big Bazaar can together fight with the middle-class households by offering products at lower prices and shoppers can buy large quantities and store them for future usage – a form of hedging, if one could say so. Expectedly, all the stores in the country, numbering over 125 were over flowing with eager shoppers who started thronging the stores since as early as 9 in the morning until 10 in the night. 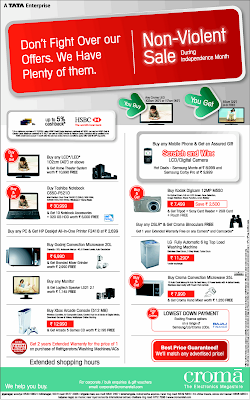 Somehow, the focus of shopping during the season remained on categories such as Grocery & Household and Electronics & Appliances. E-Zone (another Future Group format) and Croma (from the house of Tatas), both of which operate in the premium consumer durables space and target SEC A & A+ went ballistic about their offering, by providing never before prices coupled with freebies. Most notably, both were offering spot loans from Bajaj Finance, wherein select products could be purchased on EMI – Equated Monthly Instalment after paying a token sum as down payment. The processing of loans was quite simple – in just a few minutes after obtaining some basic documents such as an address proof and an identity proof, loans are sanctioned on the spot if one holds a credit card. I was amazed at the speed at which loans ranging from Rs. 10,000 – Rs. 60,000 was being sanctioned, without any collaterals or scrutiny. It is anyone’s guess what happens if the loan is not paid back or the borrower vanishes once for all.  Reliance Retail which operates multiple formats kept its communication straight – highlighting the number of stores and thereby the inherent foothold it holds in the business. Some traditional local retailers tried their best to match up with their national peers. While they successfully demonstrated their presence in the business and their respective leadership positions among their target customers with full-page ads in national dailies, they also showed that they could offer at prices similar to those offered by national players thereby conforming their positioning – they remain equal if not cheaper compared the newer larger entrants within the business. 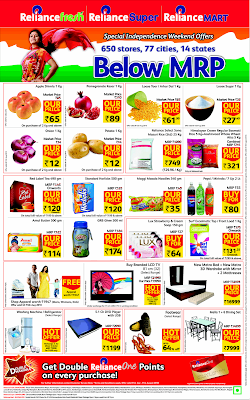 One question that came to my mind over the weekend – why so much fuss to offer the best to customers! Do we need special days in a year to pass on the benefit of margins to shoppers? Is it just a trend that’s getting started or would we evolve as we move forward? Many in the Industry already agree that in India, we just can’t rely on Thanksgiving and Christmas Shopping like in the West, since we have more than 300 days of festivals all through the year across six major religions, a dozen national holidays and many more regional excuses for shopping. Isn’t it better to maintain a momentum and build shopping behaviour all through the year rather than just creating hype during a one-off period? Am sure, the answers could be mixed and diverse, just like our Retail environment. Well, that’s the best thing about us. Incredible India. Jai Hind.