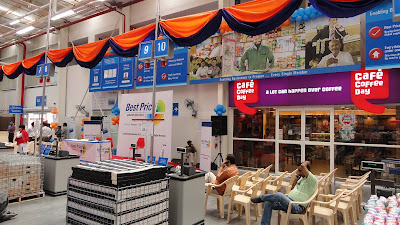 I have seen a few abroad, I have read a quite a lot but today was the first time I was part of the inauguration of a Hypermarket Store. The sixth Cash & Carry store of Bharti-Walmart, rightfully named “Best Price” opened its doors for customers today at Ludhiana. Spread over 50,000 sft on a single level, the store has almost all categories including Grocery, Fruits and Vegetables, Fresh Meat, Personal Care, Home Needs and Home Care, Electronics and General Merchandise. Café Coffee Day is the only F&B point, right after the cash counters – smart planning by the store designers. This is the third CCD after opening within Best Price stores at Amritsar and Jalandhar. Addressing a small gathering of the Press & Media, Employees, Vendors and Guests, Mr. Rajan Mittal, Vice Chairman of the Bharti Group emphasized the relevance of Organized Retail and such formats in the current Indian scenario. He expressed his pride that the group was able to open at their hometown of Ludhiana where he had lived for over 20 years and thanked well-wishers for their stupendous success. Drawing an example of the telecom industry which was in its nascent stage fifteen years back, and which was fully controlled by the Government through its own bodies, he said that the sector was opened up to private players and today, India has a remarkable tele-density. Similarly, the group is pioneering Organized Retail through two formats, the B2B model (Best Price) and B2C model (Easy Day markets) in association with Wal-Mart, the world’s largest Retailer. He also drew comparisons of how China had opened up Organized Retail, how employment is generated and millions are benefitted. Mr. Raj Jain, President of Bharti-Walmart said that the company intends to expand outside of Punjab in states such as Chhattisgarh, Madhya Pradesh, Rajasthan etc. South India would also be a focus with one out of the three Distribution Centers expected to come up at Bangalore. He explained how small retailers can benefit immensely by becoming members of the Best Price format – registration is simple, just a few documents to be provided and patrons can benefit from the prices offered by the store. To ensure only genuine buyers are using the facility, he said that the membership is renewed annually. Credit Cards are not accepted but Kotak Bank, which is the strategic partner to the Retailer, provides 14 day’s credit to members who are part of its own credit program. 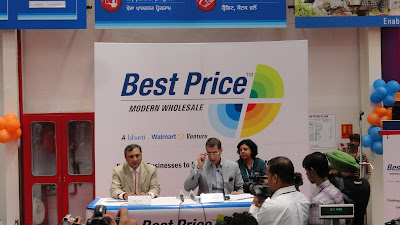 While the discussions on FDI is raging all along, Mr. Mittal expressed that the intellectual debate was over and it is now time to act – to open up the Retail sector and allow 100% investment across various formats. The white paper on allowing FDI was published by the Government and the industry has replied their thoughts and concerns. Currently 100% FDI is allowed only in the B2B model while 50% FDI is allowed in the B2C formats, although foreign companies can invest upto 100% in single-brand Retail. Such investments would allow multinationals to invest in back-end supply chain, only which would fuel front-end business. Bang on.
Well. It is easier said than done but eternal optimists like me who intend to spend our lifetimes in this ever exciting industry believe that this should happen sooner than later, for the larger benefit of the society. If one such store can offer direct and indirect employment to over 200 people, it is not so difficult to gauge the overall employability that the sector can generate. Currently, over a million people are part of Organized Retail in India but this number should increase significantly – by 5 times or more in the next 10 years, if only the Industry is allowed to grow. Specific to the Cash & Carry format, small traders and retailers can benefit immensely, thanks to the EDLP or “Every Day Low Pricing” philosophy (although founded by ASDA) but  implemented aggressively by the Grand Old Man of Modern Retail, Sam Walton – the founder of Wal-Mart. He believed that consumers must benefit everyday with lower prices – the reason was two-fold – one, that customers would not hoard commodities for the future; two, that they would visit the store more often, a smart way of driving repeat footfalls. For a nation that has over 10 million small and medium retail stores, India doesn’t have even 50 Cash & Carry Stores! Metro AG, the German Retailer opened for business in 2001 and operates half-a-dozen stores, while the French Retailer Carrefour commenced in 2010 and is still studying its first store located in the suburbs of Delhi.  The Future Group and Reliance Retail are also carefully monitoring and are expected to launch their own Cash and Carry formats soon. Expect a lot of action in this space. And if you are a professional running your own business, be sure to reap rich benefits from such stores. Long Live, Organized Retail. 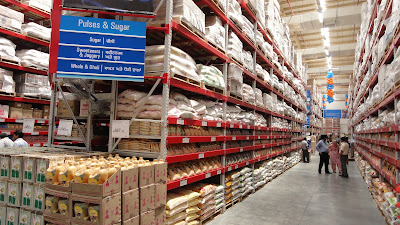