Borders–A book in itself to read for Indian Retailers!

To keep up with time is one of the biggest challenges, whether it is for individuals or for organizations. For Retailers, the challenge is two pronged; while keeping up with its tradition and background, it is equally important to keep pace, if not be ahead of its own time. A classic example is this regard is the recent announcement of liquidation of Borders, one of the most respected and well known book retailers in the world. Actually, Borders was a book store in Ann Arbor selling used books when it was started by brothers Tom & Louis Borders in 1971. Two years later, they moved to a larger location, thus pioneering the big box retail concept for book stores along with Barnes & Noble, another book retailer that is much known for its large format outlets. While the smaller, stand-alone book retailers were carrying around 20,000 – 30,000 titles, the two big retailers offered between 100,000 – 200,000 titles as well as other interesting adds-on such as comfortable seating and attractive lighting, not to forget the air-conditioned environments with coffee shops! Unfortunately, none of it has come to the rescue of Borders which would be liquidating its 399 stores soon, mainly due to its $40 million debt to creditors more than the total value of its assets. Barnes & Noble on the other hand has $900 million in assets alone and its Sales seems to be growing, especially online. B&N also has its own e-book reader – the Nook, up and against Amazon’s Kindle and Apple’s iPad, which was among the Top 10 Gadgets of 2010 on Time.

Wall Street firm Credit Suisse estimates that B&N would take more than 50% of Borders’ business due to it store closure, although in the short-term, Borders would see higher turnover because of its liquidation sales. The most concerned due to the closure of Borders stores seems to be its loyal customers, who feel they will miss the neighbourhood stores where they have been shopping for long. Much has been debated about the Borders story, online and offline by Retail enthusiasts, strategists, customers, et al. Some say that Borders couldn’t keep pace with the Technology shift – while people were moving from hard copy books to digital, the Book Retailer was still grapping with its plans.Though it did start offering digitised versions for sale, it was a tad too slow, a little late for its times.

Back home, the story is a bit different. In India, reading habits are very different than those in the West. In a country where English as a medium of teaching is restricted to the metro cities and probably a fewer towns, regional writing (and thereby reading) is big. This leads to optimum merchandising by the book stores who often struggle with the right quantities / titles that they should carry. Large Retailers in India such as Odyssey, Crossword, Landmark, Time-Out (from Reliance Retail), etc. have focussed mostly on English titles – tried and tested with the markets that they operate in. With regards to size – almost every size has been experimented, I would say. From small 900 sqft outlets (mostly a shop-inside-a-shop or simply, shop-in-shop) to 20,000 sqft so-called flagship stores, Book Retailers in India have them all in their kitty. Books still contribute not more than 60% of their sales and about 70% of store usage. The rest of its sales and space allotment is through various other categories such as Greeting Cards, Music & Movies’ CDs, DVDs, Game consoles such as X-Box, PSP, and in some cases even perfumes and cosmetics, not to mention coffee shops such as Cafe Coffee Day in some of their stores. With a very small quantity of e-book readers being sold in the market today, digital reading is not yet as big as it is in Western countries. Experts have differentiated opinions about the growth of such devices; with cheaper imports from China and Taiwan flooding the markets, one would obviously find a higher off-take over the months to come. But having a digital reader is just the first step; the user has to subscribe reading materials online or have to buy books to read them on their readers. For which e-commerce has to be enabled and empowered. For which the user should be convinced about the safety of using their e-wallets. Well, yes long way to go. 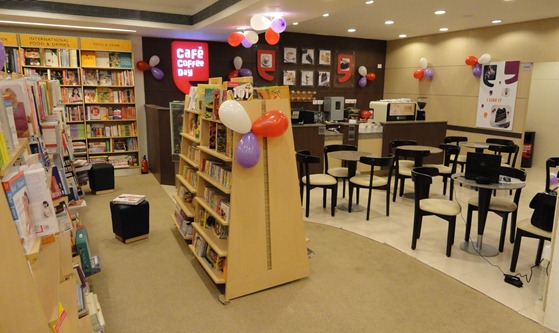 Having said that, are Indian consumers ready to go digital? Not yet.

Satya Rao, a Mumbai resident and an automotive consultant to a large US Conglomerate who has been an avid reader of books since his childhood across various categories says he would still walk into a Retail store to buy books, although he uses his iPad for various purposes other than reading online. Manish Malhotra, a Retail professional for over 15 years and a book-freak browses online these days to zero in on a relevant subset of books which he would later explore at a book store. Anjali, a HR professional working for an IT giant that makes life easier for Retailers worldwide by providing processes and solutions however feels the store visits are more about the exposure to a large range which is limited online. Raman Kalia, a marketing professional who has built an airline and an airport over the past 8 years feels being amongst books has a charm which cannot be replicated by online book retailers / websites since one is generally limited to what they know while browsing online while a physical book store opens up even more.

I personally remember (and so would many erstwhile Madrasis, a book store by the name “Seetharaman & Co.” – a one-stop shop which would house all forms of educational reading materials. The store was vertically graded and students from all across Madras would visit the store. It was quite rare that the Retailers (who was actually a distributor) would run out of stock. And if the store didn’t have what the customer wanted, it would be made available within a certain time frame. During the late 90s, a relatively larger, modern book store opened at Nungambakkam high road in Chennai. The store, which was located in the basement of a commercial complex was a haven for all kinds of books and was one of the first of its kind which allowed enthusiasts to read books endlessly, without compelling them to buy. Founder Hemu Ramiah later sold her stake in the book store to TATA’s Retail arm and the book store is none other than Landmark - A small neighbourhood book store that grew nationally to become one of the biggest and most respected Retailer of its kind in India over the years. M Madhu, the former Head of Merchandising of Landmark is reported to have recently moved on to head Amazon’s India operations – after all, who would know better than him how to entice readers by providing what they want.

So, what’s in store for Indian Book Retailers? Does the store size and titles that they carry will have an impact on the consumer’s requirements? Does providing amenities such as wide aisles, relaxed seating within air-conditioned precincts and a cafe here and there would be a strong hook to increase footfalls to the store? Do loyalty programs such as Crossword Reward programs or Landmark Fellowship to retain existing customers and increase their spends visit after visit? Well, while there are not too many clear answers for such questions, what’s sure is that Book Retailing is here to stay in India for quite some time to come. Reading is a habit, and is best to build such a habit from childhood. Many retailers have weekend activities targeting children – idea is to first bring them to the store; they would grow up reading themselves. On Digital – as mentioned before, India has its own constraints of e-commerce, starting from points of access to payment gateways. While things have improved a lot over the years, online security (or rather insecurity) is a looming factor that needs to be addressed by Retailers.

Online shopping or not, the charm of book stores would remain. For some its the romance of books and book-shelves, and for many its the enlightenment that they perceive they would get while browsing, buying and reading books. And for many, its just a customary visit every week to pick up magazines. Whichever way, Book stores are here to stay – just that the Retailers have to pull their act better, and yes NOW.