UnHate the campaign, atleast for the Consumer’s sake!

There is so much brouhaha about the most recent campaign of United Colors of Benetton, the marquee fashion brand from Europe’s fashion capital, Italy. Benetton’s in-house design agency Fabrica has created the recent campaign among many others over the years, particularly the one which showed a blood smeared baby still attached to its umbilical cord which was also a much talked about one. Benetton also had campaigns which showed a nun kissing a priest, three hearts declaring “white, yellow and black” and so on. Over the years, Fabrica has attracted global talent to work in its think tank and has been a darling of the creative minds. The recent Unhate website has this to say;

What does UNHATE mean? UN-hate. Stop hating, if you were hating. Unhate is a message that invites us to consider that hate and love are not as far away from each other as we think. Actually, the two opposing sentiments are often in a delicate and unstable balance. Our campaign promotes a shift in the balance: don’t hate, Unhate.

The UNHATE Foundation, desired and founded by the Benetton Group, seeks to contribute to the creation of a new culture of tolerance, to combat hatred, building on Benetton’s underpinning values. It is another important step in the group’s social responsibility strategy: not a cosmetic exercise, but a contribution that will have a real impact on the international community, especially through the vehicle of communication, which can reach social players in different areas.

The Foundation will organise initiatives involving different stakeholders, from the new generations to the institutions, international organisations and NGOs, through to civil society.

The Foundation also aims to be a think tank, attracting personalities and talents from the fields of culture, economy, law and politics, and people who have gone from simple citizens to leaders of movements, distinguishing themselves through their ideas and actions against the causes and effects of hatred. 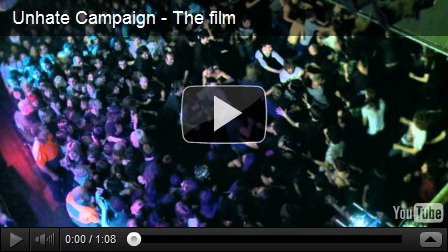 The Media frenzy, as always makes it more sensational that it seems and there is enough outrage in the internet world and the real world about this. Industry leaders from the advertising world (in India) have commented on the afaqs! website, which is as follows;

I think the entire campaign is sensational and unnecessary. It is certainly edgy, but being edgy does not mean that you cross limits. A lot of people will say that it is a fantastic way of doing things, but I feel there are other fantastic ways of doing things.

One other campaign of the brand showed a blood-smeared baby still attached to its umbilical cord. As a brand, it has done several such campaigns in the past. But, this time, I feel that it has done it intelligently. The message that nations/religions should not hate each other has been conveyed effectively through the best form of expression of adore - a kiss. Leaders are representatives of the masses. If they would have shown Barrack Obama hugging Hu Jintao, then it would not have been as interesting. But, this one works and is brilliantly executed.

It is a controversial ad. But, that is what it is supposed to do -- create controversy. Fifty per cent of the people will feel that it is in bad taste, while the other 50 per cent will find it interesting. However, despite the like or dislike, it will induce talk-ability. I think visually, it is supposed to be debatable, but at a thought level, it is not at all a debate.

The fact that this campaign has been successful in creating a debate is by itself a success of the brand and its objective. However, it is also trying to push too far.

Well, the big question is, Does this campaign really solve the purpose of Love, or rather, Unhate? Oh, am not sure. Does this campaign appeal to the younger generation who is the intended customer base for "Brand Benetton”? Absolutely. Over the years, Benetton has seen stiff competition from Spanish fashion giant Zara (which apparently changes the design/range at its stores every few weeks) and several other brands such as Mango, Esprit and many other local brands in several markets (Benetton has over 6,000 stores across 120 countries and clocked over 2 Billion Euros in Sales in the year 2010). In India, the brand has done well in itself, thanks to its aggressive growth strategy and plans since its turnaround in 2005 under the new leadership led by its Indian division. The campaign has just gone viral and the company plans to spend over half of its less than advertising budget of 10 Million Euros  in digital media and the balance in traditional media. Like many I too wonder if this campaign will go public in the US, China, Korea and the Middle-east – the leaders of whose countries are mentioned in the said campaign. For obvious reasons, I am sure the campaign will not feature in India as well and they dare not even dream of having Indian Politicians (sic).

All said and done, it is indeed a wonderful attention-seeking opportunity for Benetton, although it is anybody’s guess if such (unwanted) publicity would necessarily translate into Sales!