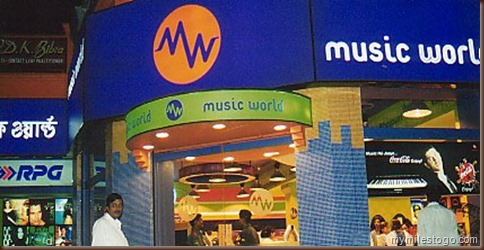 It was a bright sunny sunday, June 24th 2001 to be precise. I landed in Kolkata in the morning by train at Howrah where my former classmate picked me up at the Railway Station. The smell of freshly procured fishes welcomed me as we passed by the Howrah Bridge over the Ganges in a yellow taxi – the iconic Ambassador which still runs in the city even now. After lunch and a short nap, I walked down Russell Street towards Park Street, the most popular shopping alley in what was then known as Calcutta. At the corner was an iconic orange and purple signage aptly named “music world” – the main branding purposely in small letters to convey the casual attitude of the brand. As I entered the store, I was in for a shocking surprise. Over 8,000 sft of space allotted to music – cassettes and CDs. There were separate areas for different genres of music. At the entry was Hindi and Bollywood – the Bengalis loved hindi film music as much as they loved their own. RD Burman and Kishore Kumar, were afterall local boys who made it big in Bollywood. And so was Amitabh Bachchan who used to roam around Park Street looking for a suitable career over 50 years ago. The influence of Western Music was notable on Bengalis – From Carpentars to Led Zep, from Michael Jackson to Madonna, people here listened to all forms of music. Regional Music – Bengali language was located at the far end of the store along with some titles from other parts of the country such as Tamil, Kannada and Telugu. Rabindrasangeet, the music compositions of Nobel Laureate Rabindranath Tagore sung by various artists had a separate section. This was the largest music store in the country.  And I was going to be managing the store from the next day onwards! Whoa! I was so excited.

Life at MW as it was called was pretty cool. The store would open for business around 10am and would close by 8.30pm as per local government norms. Customers would slowly start trickling in the morning, typically housewives and retired people and a number of NRIs who were on vacation in town. College goers and those who work in offices nearby would peep in during lunch hours before or after having a delicious meal at one of the restaurants on Park Street. Evenings would be college goers and music enthusiasts. In 2001, the store used to clock a sale of Rs. One Lakh per day selling music cassettes worth Rs. 35-55 each. DVDs were slowly growing then, and Video Games were starting to become a rage among the young and old slowly. Need for Speed was the most sold video game of those days. The RPG Group which was the company that owned musicworld launched with much fanfare “Hamara CD”, a kiosk which can create a customised CD of songs from across their extensive catalogue. The concept took off well though the prohibitive price of about Rs. 350/- per CD was too much of an ask and a deterrent to growth. Eventually, it died a natural death.  There were so many album releases and launches almost every other day. It was great interacting with the guests, notably of them included Sourav Ganguly who had come for a music album launch and Diya Mirza who had come to promote her film “Rehna Hai Tere Dil Mein” (RHTDM, which was originaly made in Tamil as Minnale). Artist visits and Launches would culminate with a High Tea at the Flurys next door, one of the oldest and most respected Cakes and Pastries shop in the country. I had a great team to work with and each member knew their job so well. In fact I am still in touch with a couple of them and one of them has stayed back with the same store till date – for over 14 years! 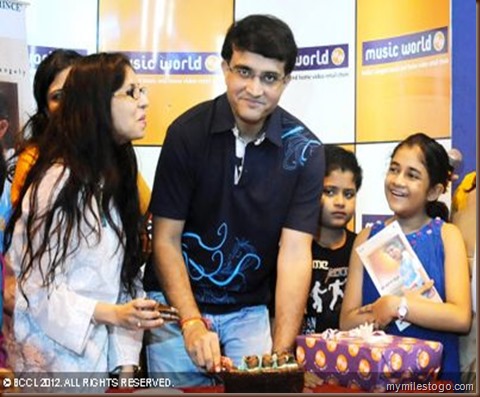 Even during those days, I was of the opinion that music would become free sooner than later. And to promote music, we had to promote music players and alternate sources which could play music. Early 2000s were the time computers were beginning to become a part of our corporate lives. Thick cardboard files were replaced by Floppy Disks carrying 20 times the data and which could fit in easily in a shirt pocket. CDs were just about to be gaining popularity. MP3 was a fairly unheard of format then. I remember discussing in various internal meetings that the company should sell music players along with music Cassettes and CDs. Naturally, as a freshly passed out Management Graduate from a Business School, my pleas fell onto deaf ears. I believed that unless we promoted CD players – the huge decks and portable ones, there was no chance that we were going to sell more CDs. I had already sensed that cassettes would see their end sooner than later and the next big wave was hearing music on computers and laptops. Almost every single senior that I interacted with laughed me off. I also suggested that we entered the Mall way of retailing – Rahul Saraf, the promoter of the first organized Mall in Kolkata, The Forum approached me to discuss a proposal to set-up a MW outlet within. My proposal was beaten down by the Management saying that Calcuttans would not shop at Malls and would rather prefer local markets at Ballygunge or Explanade. MW entered Malls much later but by then, music was already available in various other formats across devices. Sadly, the business declined slowly and it was recently announced that the curtains would permanently come down by the end of June 2013.

I don’t fully agree that piracy alone is the reason for the decline of the Music Industry. It is also because the industry failed to keep up with the technological advancements. I was recently reading on Forbes India about Alok Kejriwal of Games2Win and his Indian experiences when he tried to come up with wonderful ideas in the mobile telephony space. He was the one who successfully pioneered the concept of Caller Tunes in India – one could send an SMS and get a caller tune and have it stored in their mobile phone. As he painfully explains, the mobile operators wanted to charge a premium for the service and also a lions’ share of profits from the venture rather than making the concept popular. Similarly, the Hamara CD could have been a clear winner those days. But the opportunity and greed cost the company quite a bit. Over time, music world eventually started selling non-core items such as MP3 players and the like, but it was too late by then. The kiosk outside the store on Park Street was selling cheaper chinese made MP3 players for a quarter of the price. music world also failed to collaborate with other music labels in the country to come up with alternate ways of streaming music, mainly because they owned the domestic and international rights of the extensive HMV catalogue. In fact, initially HMV owned content would get more prominence in the store than that of other labels.

A couple of years back, I approached music world to co-opt with Café Coffee Day, India’s largest coffee chain with over 1,400 outlets across the country where I was the Head of Business Development and Expansion across the country. Instead of seeing it as a way to garner more footfalls and attract more music enthusiasts into the store, the folks at the company rather tried to charge a premium for space. Obviously the deal didn’t go through. Am sure, the team tried their best to revive the falling business, but what probably lacked was innovation and new ideas, not for the lack of it but for a lack of willingness, probably. It was one of the saddest days in my life when my former colleague informed me about its closure. I always knew this day would come, but it was earlier than expected. RIP Musicworld.