Is there something as a Click-Only customer?

I was recently invited to attend the first edition of the Retail Marketing Summit Chennai, organized by Paul Writer, a leading consultancy which works in the Marketing space and advises various enterprises. The day was very exciting, with speakers from various Retail companies and Brands expressing their opinions. During the course of discussions, there was a topic which was discussed elaborately by the esteemed panel of guests as well as the audience. The topic of discussion was, whether there was someone called a “Click-only customer” that existed, who shops only online. There were ayes and naes but there was no single answer that could be fully validated. On the need for having an online presence and also focusing on the internet commerce business, Mr. Pattabhi Rama Rao, President of Australian Foods, which runs the Cookieman chain of stores felt that the market is too small at the moment on the internet and Retailers should continue to focus on the offline business by providing a better customer experience. In his own words, Man is a social animal and social interactions would never cease to exist. Pattabhi should be knowing well. With over a dozen years behind him in the Hospitality business, he started off the Cookie business 13 years ago. His brand of cookies were priced 10 times as that of a normal biscuit, although such a comparison is odious. He continued his focus in the business and now has over a 50 stores across the country. Most of his outlets are located in prime locations in Malls and Airports. Many of them bake fresh cookies at the store and the aroma spreads all over. It appeals to the senses and therefore converts a passerby into a customer, a customer into a loyalist and a loyalist into a brand ambassador. However, there is indeed an opportunity to sell categories like cookies online, although they are restricted to gifting and occasion based purchases. 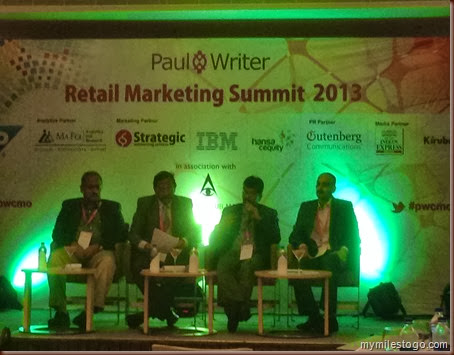 In another panel discussion, Calvin John of Caratlane.com which specialises in the sale of jewelry products said that a customer has purchased 35 times in a few months from their site. And he felt that there were a small but growing species of “Click-only customers” who shopped extensively online. Jessie Paul, the convener of the event and also a moderator in one of the sessions confirmed this and said that she shops grocery extensively online at BigBasket.com, a Bangalore based start-up which has been slowly but steadily growing its online-only grocery business. With more and more people shopping online, it is all about convenience and discounts? Would the charm of shopping (at Retail outlets) dwindle over time? There are references to the West and how things have been changing in developed countries. A lady from the audience says that at Macys.com, sales were 37% of the total compared to just 26% in the previous year during the holiday season. And this was countered with a view that the sales increase was only during the Holiday Season when Macy’s was very badly organized at their stores. In India, the Books category was the first to succumb. Customers (in India) bought books online from Indiaplaza, Flipkart, eBay and the likes not just for convenience but also due to the generous discounts that were being doled out. But for those discounts, would customers have bought online? Perhaps yes, but a majority would prefer browsing and buying at their favorite books stores down the road such as Crossword.

The Internet Commerce business in India is still too small compared to the Offline one. As it is, Organized Retail in India is just under 10% of the INR 200,000 Crores market size. And e-commerce accounts for a decimal percentage of that. Although online retailers are showing double digit growth year on year, the business model is largely led by discounts and there is no hypothesis at the moment to prove that shoppers would still buy online at full prices, except for the gifting and essential categories. In my opinion, there is room for online and offline Retailers, But the bigger growth is offline, given the levels of broadband, internet and computer penetration in India. Payments gateways for credict cards, debit cards and Net Banking is quite limited too. In fact, I would place my bets more on m-commerce - shopping on smartphones which is still an untapped category. So, if you are a Retailer or a Brand, do build an internet commerce site now, if you already don’t have one. But remember, Retail is all about customer experience, and there is no better place than the store to demonstrate it. After the successful launch of 137 stores across the country, Fastrack, the leading youth fashion accessories brand (a division of Titan Industries, part of the $85 billion Tata Group), today announced the launch of their flagship store at CMH Road, Bangalore. The success story of the Fastrack stores has been unprecedented. Since the launch of its first store in 2009, the retail channel has grown to 137 stores across 68 cities in all metros, mini metros and several smaller towns like Manipal and Nasik receiving tremendous response from its young consumers. The brand is looking at increasing the number to 250 by the end of 2014. Fastrack’s current stores occupy between 500 sq. ft and 800 sq. ft. The flagship store is spread across 1000 sq. ft. The space unfolds through a series of installations and events. A physical grid of white pipes forms the basis for a grid, from which various display systems are suspended. This meshwork of grids hides away services and lighting, and supports various display systems. The store also does not rely on conventional materials apart from a basic vitrified tiled floor, to address issues of uniformity during rollouts across various cities in India. Walls are plastered with a precise mix of cement and form a neutral backdrop to the installations.

Even though there is order in the apparent chaos, there is an underlying sense of exploring a bazaar. This format will be adapted to a multitude of retail formats, including stand alone stores and kiosks. At cursory glance this seems a daunting task, but the entire design is modular and flexible. On the launch, Ronnie Talati, Business Head & Vice President, Fastrack said, “Fastrack is an irreverent brand with in your face, tongue-in-cheek communication; always known to generate a stir, the brand has created a legion of dedicated followers and fans. Fastrack has now managed to translate the irreverence of the brand into a physical space with the launch of this new retail identity”.

Each category has a space of its own and is designed with installations unique to that category. The watches are displayed inside bird cages, the belts are casually worn around a mannequin and the theme is carried forward to poles covered in leather and studs. The bags are suspended in rope using carabiners. Wallets are meant to be pickpocketed from the back of denim jeans and lie hanging out halfway from the pockets, eye wear is displayed on bright yellow bananas. There are old beaten up trunks, floating tables, mirrors, reconditioned refrigerators, urinals and water closets used as display devices, and various objects strewn through the space. Even the transaction desk is centered in the middle of the store becoming an intrinsic part of the experience. Even the signage does not take itself too seriously, and is a riot of blinking color changing lights, set to a DMX controller, representative of lighting from the high streets of Broadway, NY. The small open space in front of the store houses a bike rack and a folding bench. 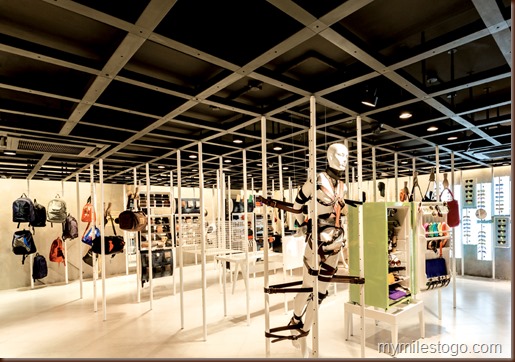 Fastrack is among those handful of brands to set-up a Flagship Store for themselves. Almost every Retail brand worth its pound would like to set-up its Flagship Store in a prime location in the region / country although only a few actually do so. And even more fewer maintain such stores well enough to call them their Flagship. Some of the other examples of Flagship Stores of iconic brands include; 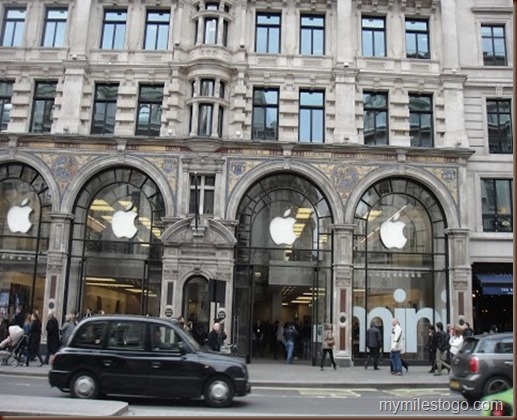 Flagship Stores add a strategic advantage to the Brand as compared to normal stores. Potential customers visit these locations to know and explore the brand in detail, to appreciate the beauty and background of the brand and most importantly, to also buy – conversions are usually higher at these stores than the usual retail lot. In some cases, the Brand showcases certain products exclusively in the store after which they are sent to the rest of the Retail network. This practice is usually condemned by the trade, especially when Franchises are involved although the gap between the time to launch at the Flagship Store and other stores is too narrow these days, usually under a fortnight. Overall, it is extremely important for Brands to have a Flagship Store. Usually, it is quite easy to put up one, the challenge is to showcase and maintain them in the long term.