Have been on a pan-India tour for the past few weeks, visiting our stores, interacting with my colleagues, our valued franchise partners, mall managers, heads & ecosystem partners and of course, our esteemed customers. I must admit that my trips have been skewed to Tier 2 towns and by design. For, this is where India lives and spends. Over the past 24 months or so, we have witnessed a massive reverse migration from bigger cities to smaller towns, ever since the pandemic led lockdown began. Initially thought to be a short-term trend, things seem to have gained traction all across India for the past 1 year. So much so, that many employees across Industries and companies are now – literally demanding – that they be allowed to WFH with a hybrid model of physical presence at the office precincts.

One’s loss is another’s gain, they say. As a Retailer, I cannot complain!

The photo above was taken early June at Uttar Pradesh capital Lucknow’s famed Phoenix Pallasio Mall on a weekday. The 1 million sq.ft. Mall has a dozen or so international luxury brands, 3 dozen+ international premium brands, over 50+ domestic brands and scores of regional brands in fashion and food. This mall is located pretty much in the outskirts of the town and has a neighbour closely, the 6-lakh sq.ft. Lulu mall which opens doors in Q2 FY22. Last week I was at Guwahati, Assam and our Franchise Partners says the state is about to get 8 new malls. At a Starbucks cafe in Bhubaneswar’s Esplanade Mall, I saw for the first time more tables filled with family crowds than anywhere in India! The foodcourts across Malls are overflowing as though there is a shortage of food in some areas (sic).

This kind of retail upswing in Tier 2 towns is unprecedented at best. As I celebrate by silver jubilee in Retail this year – 25th year since I started scooping ice-cream in 1997, I have seen multiple waves in retail. The first one was around 2001, when modern retail hit the streets. Around 2008, we saw a Mall boom, primarily led by the Metro cities and Tier-2 asking for department store chains like Central, Shoppers Stop, Lifestyle, Westside among others. Around 2014, the retail growth hit a peak with several unstructured malls (zoning wise) either shutting shop or turning coats to become a commercial (offices) dwelling. Since 2017, things swung back to action, especially after the introduction of GST, much to the surprise of economic critics and experts. 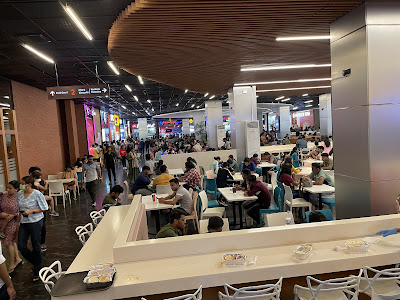 We live in a pandemic world – I don’t call it a post pandemic one – because the virus is just here to stay in some form or the other. Just that we humans have become more resilient. Every 6-8 weeks, the Media Industry fuels scare with new statistics, but consumers have been dodging these overtures since Sep. ’21. This shall continue for a while and eventually pass by. But the growth of Tier 2 markets is here to stay for sometime. One big reason for this is that there is money in the pockets of the aspirational middle class. Monsoons have been good for the past 2 years, so has been Agri-production. Oil crisis has been surging ever since the Ukraine-Russia conflict began. But India and Indians have adjusted. The statistic compilation on inflations seems to read otherwise, but that’s more theory I guess. The jobless have remain so by choice, not because there is a lack of opportunity.

While a small group of people were throwing stones and torching trains at Patna Railway station last week, I saw several hundreds of youth at retail stores and malls working earnestly for a better today and tomorrow for themselves and their families. Real estate, residential and empty plots - especially if it is of any indication, then the smaller towns seem to be a better bet in terms of wealth creation. The surge in Tier 2 markets across India seems to be unstoppable, atleast in the Retail sector, one that is integral to me personally and professionally. The rent for retail stores matches metro cities by 1:1, sometimes 1: 1.5 or even more. The challenge is supply (of spaces) and not demand. This will settle down soon, as well.