Many of us would have seen Fuel stations abroad, especially in the West, where they extend other facilities - such as ATMs, Convenience Stores, Garages, and even Food Courts/QSRs, etc. While I was filling Fuel this morning at a Petrol "pump" near my house, I was wondering, what else I could do around the same time - I had to pick up some vegetables, ice-cream, bread (for Sunday breakfast) and some Magazines. The nearest outlet, where I could get all the above (either in one store or in different ones), was atleast another 10 minutes’ drive, but how I wish I could get some more under the same roof! Although it’s quite common to see some Oil Marketing Companies in India already in the fray for some time now, there is no great headway as such. While Vishal Retail has tied up with Hindustan Petroleum to start forecourt retailing at the HPCL outlets, Indian Oil has inked a deal with Future Group. Bharat Petroleum has tied up with Cinemata to set up cinema halls at its 300 fuel outlets on highways across the country by 2010. 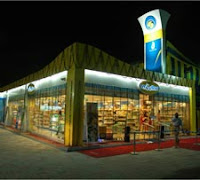 To begin with, as I see, the main issue is ownership. Whilst most Outlets are franchised, the franchisee pays the lease rentals (if not owned by them, which is rare). The Franchisee makes about a Rupee or less for every litre of fuel that’s sold. No wonder, the franchisees spend a lot of time these days at the Outlets, to ensure quick and efficient service (with a smile) and thereby getting back these customers. Apparently, the Loyalty factor is among the lowest in this business, I am told. Some of us are quite particular about where we fill the fuel – but that’s just some! Many of them do not really plan their usage and hence drive into the ones that are closer, when they finish the tanks.

So, if there were (Organized) Retail formats here, then there is again an ownership issue – most of the Convenience (format) Retailers do not prefer the Franchise model and this could be a stumbling block. In Bangalore, there were some F&B operators who tried this – they are not popular coz’ they aren’t successful, possibly due the slow or nil growth. Larger Organizations wouldn’t be averse to this model, but I am particularly not sure what’s stopping them. In today’s times, where every square feet of space is expected to fetch returns, it’s not a bad idea to sub-lease a part of the premises for various other activities.

Just a matter of time, I keep saying (to myself), the eternal optimist that I am. Hopefully, my optimism will not be a dream. Let’s see.