Retailers in India seem to be continuing their efforts to open new stores, despite a slowing economy, higher import values, a falling rupee, increasing inflation and a weak consumer sentiment. This has been evident in the Retail Sales over the last two Quarters of this calendar year especially in high-value items such as A/Cs, Refrigerators, LCD TVs, automobiles including two-wheelers and four-wheelers. On one side, Retailers are offering huge discounts to lure customers – in India, Q1 & Q4 (for Financial Year starting April onwards) are essentially the most difficult times for clearing inventories and it is relatively easier in Q2 & Q3 due to the impending Festival and Marriage seasons. The above mentioned macro-economic factors haven’t helped them either. And Product ECommerce (excluding Ticketing services which account for over USD 8.5 Billion) which is estimated at over USD 2 Billion (approx. Rs. 11,500 Crores) is the biggest competition today for many Brick & Mortar Retailers, at least in the metros and mini-metros where Consumers have a reasonably quick and safe internet connectivity. And on the other side, large stores are being inaugurated in the hope that consumers would still like to visit and shop. We truly live in two contrasting worlds, to say the least. India's largest retailer, Future Group, which runs Central Malls, Pantaloon Fashions – a Department store chain, Big Bazaar Hypermarkets and FoodBazaar supermarkets among various other formats and models has scaled back its expansion from 2.5 million to 2 million square feet this fiscal year due to an economy growing at its weakest in nine years. The growth rate was 5.3 percent on an annual basis in the March quarter. 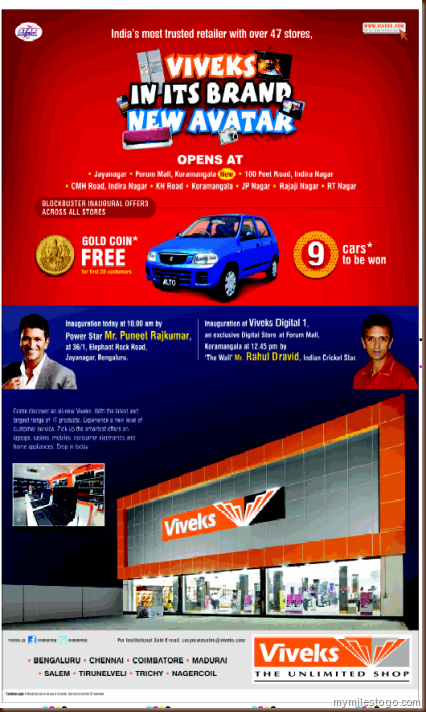 To drive footfalls to the store, continuously and consistently is one of the key challenges for Retailers anywhere in the world. That the population in India is huge is a bonus factor. However, conversions are miniscule. In the apparel and lifestyle formats, conversions range from 8-15% (those who buy as against those who enter the stores) while in consumer durables and brown goods, it is even lower. For Malls, which are destinations and are expected to attract significant footfalls, the conversions range from 3-5% and maybe lower in some cases (on a lower base of footfalls, usually). Given this fact, Retailers are in a frenzy opening newer stores within existing cities as well as in newer cities. One such example is Viveks, one of the oldest Consumer Durable Retailers in South India which was also the first one to start an EMI option in the early 90s when the Indian Economy was just opening up. It is rather surprising that the Retailer chose to remain a regional player, unlike its later counterparts such as EZone (part of Future Group) and Croma (from the house of Tatas) who quickly increased scale and went national with their presence. EZone is having operational challenges but that is not because of expansion but rather due to internal issues. To add to the woes of Consumer Durable Retailers, Hypermarket Chains such as Hypercity, Big Bazaar, Star Bazaar, etc. also stock Electronic Goods.

To expect continuous footfalls all through the week is rather not practical. Instead, Retailers focus on weekend shopping festivals, usually for short durations. This is the time when Shoppers visit Retail stores and chances of conversion are higher!

Superior Customer Service is something everyone talks about but is not generally followed all the time. And Customer Service is not just a gentle staff doing some smooth-talking and smart selling. It includes all the moments of truth – from hygiene factors such as lighting, A/c, Parking, etc. as well as product knowledge and friendly staff.

Multiple Retailers sell the same Brands and products. So why should a customer actually shop with one Retailer and not with another? Honestly, there is no clear answer. Consumers do not buy products, they buy Brands. And this includes the Retailer’s Brand Value as well, on which they should be focusing on.

Showrooming – a prevalent concept in the West where shoppers visit Retail stores to check out products and prices but ended up ordering on Amazon.com or other ECommerce portals is brewing in India too. So, the difficulty of touch-and feel is negated. Another challenge is paying by Cash which is also something that ECommerce players have started over the recent months. Lastly, the convenience of getting the product on hand immediately – something that ECommerce players are finding it difficult to deliver but are successfully meeting customers’ requirements within 2-3 days in general.

With so many challenges, I wonder at times whether Retailing is worth the effort at all. For some, it’s a question of growth, for many it’s a matter of survival. With the opening of FDI in Retail sooner than later, the Big boys with boat loads of cash are going to lap up market share easily and faster. Interesting times ahead.