- August 30, 2018
This is my 21st year in Retail and I am still not amused that the Indian consumer’s love for discounted prices has never waned. Back in the late 90s when I first encountered a modern Retail outlet at Mandaveli at South Madras where my mother sent me to check out the new Store since the Sugar that was sold there was cheaper and of better quality than at the Ration Shop we would buy regularly, I was quite amazed at the whole set-up. It was a nice shop on RK Mutt Road with a bold red signage and white font which read “Subiksha” meaning prosperity in Sanskrit language. That the Indian Consumer has been price-conscious is known, but what’s interesting that almost all products in the country is today is sold at MRP – of course there are exceptions.  In categories like Electronics, the concept of Maximum Retail Price is just for Statutory Prices – to satisfy the Tax authorities. It’s been more than a decade since Electronic items were sold on MRP, barring new releases of Mobile Phones – Apple retains MRP for quite a long time since launching new product ranges while most other Brands cannot and do not retain MRP for more than 2 weeks since launch.

In Fast Moving Consumer Goods (FMCG), MRP has always existed and will remain so, thanks to the MRP Act which governs pricing of consumer products. However, most Retailers of all sizes – S, M, L or XL or XXL (pun intended) offer or atleast promise to offer products below MRP. Subiksha’s initial success was due to a Brand promise that “Every product was priced below MRP” including Medicines which was an instant hit. The Retailer carefully priced products a rupee or more below – but at least One rupee lower than MRP which was a rarity those days. Even Kiranas wouldn’t reduce so much from the price of products, however would offer credit to consumers which was the first example of ensuring “Customer stickiness” a buzzword today. Over the years, most other Retailers have played on the Price and used it to their advantage. India’s first organized Grocery Retailer Foodworld had exciting price-offs on special days and this would draw crowds to the stores. Foodworld also launched Private Label products – “different cover, same product” which was cheaper by 10-20% across Spices, Ketchups and so on. A few years later, Food Bazaar came up with the premise of EDLP, a term coined originally by Sears in the 1960s USA which was popularised by Wal-Mart later on.

Every Day Lower Price by Food Bazaar meant that there was no need for the consumer to worry about price change gimmicks; prices were low every day on a whole lot of items which kept / and keeps driving footfalls to the stores till date. On 26 Jan. 2006, Big Bazaar celebrated “Maha Bachhat Day” or “Big Savings Day” which was sort of similar to Black Friday and Thanksgiving weekend shopping in the West. The result was overwhelming and the Retailer has steadily increased it to 3-4 days now culminating with a weekend. In 2012, Flipkart ran “Big Billion Day” which was a runaway hit while also upset thousands of customers because they couldn’t get their hands on many products which were sold out in seconds and the delivery of products took more time than usual. Proof, that Indian consumers are extremely price-sensitive and will embrace price offers all the time. While this article is mainly focussed on Grocery, the competitive / discounted pricing works for every other product that’s sold in retail – from Agarbathis to Audi Cars, Furniture to Apartments (sans GST, as they advertise!). 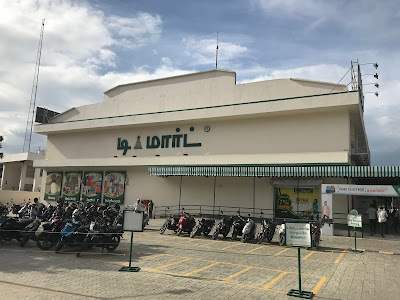 I happened to visit D-Mart at Salem in Tamil Nadu, India this week. I have visited one of their outlets in Mumbai 8 years before while exploring setting up CCD within their premises. I was awed by their offering. Almost every product was on discount – below MRP to be precise. No crazy promos, no confusing promotions, buy this and get that and so on. Simple, straightforward discounts as we Consumers like it. In no time, I was carrying a basket and when I went to the Billing counter, I was informed by the girl I was to pay Rs. 901. Unbelievable that I picked so many things. But frankly, there was more to do than pricing which stuck me – the store was spic and span. For a grocery cum Hypermarket in a Tier 2 town with a population of less than 20 lakh population, that was surprising. The girl, when I asked said the store was seven months old and is filled up to the brim on the weekends with Customers shopping till late in to the night after the city is shut. Says something about us.
Consumer Dmart Food Bazaar grocery retail heritage supermarkets hypermakets more supermarkets Retail salem Spencers Supermarket tamilnadu tier2