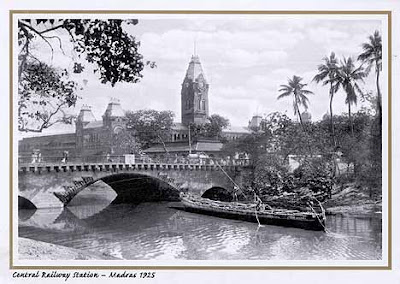 The very thought of vacationing in Madras sounded crazy to many of those around me. Some thought I was joking and found me over-reacting, looking at my excitement. After all, I was going to be in Madras (aka Chennai) for a week, many years after I moved out of the city where I lived for over 25 years. No agenda – I declared to my family, when they asked me what were the plans when in Madras. The only agenda was to eat, listen to radio, drive around and sleep well.
The first visit was to the place I grew up – no, not my school or college, but to a place called Bessy (short name for Besant Nagar Beach!). My friends and I would sit here all evening (and sometimes even during the day!), giving business to ITC’s nicotine products, talking hours together discussing (non-existent) business plans and other issues – personal, societal, social and sometimes even political ones. 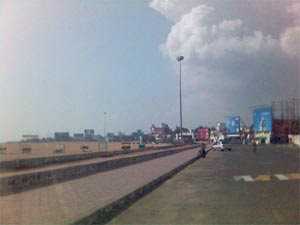 In fact, Bolywood’s ace director Farhan Akhtar was inspired by people like us in his first movie, Dil Chahta Hai! Was driving around for sometime until I finally found a parking space. Then, walked the whole stretch of over a mile – what was surprising was the place that we occupied 10 years ago was not vacant; another bunch of people were there, probably discussing similar issues (minus ITC products though!!). This place hasn’t changed much – except that there were more cars than bikes on the road, and more families than singles or couples at the shore!
Over the next few days drove down to many places in the city – from Parry’s Corner to Nungambakkam, KNK Road, Mount Road, Spencers Plaza, Alsa Mall, Anna Nagar and adjacent Main Roads, Nelson Manickam Road – well, almost every road that I knew in the city! What I saw all around was development of Infrastructure. It was getting better by the day, inspite of many whom I know who were complaining. Welcome to Bangalore, I kept saying. No – this is not a blog for city bashing or so, but one must appreciate the efforts to get the city going before it chokes. And the hottest issue in town apart from the temperature is the construction (and the agitation against it) of the elevated highway along the sea-shore. I wonder where do these activists suddenly arise from. I mean, wheredo they take their learnings from. For a city like this, if Infrastructre is not created now, then when? Anyway, I am not an expert in this matter, so I might as well keep shut.
The one thing that impresses me the most is the availability of consumers and the opportunities to serve them. For such a large Metro city, there are just three Malls – the two-decade old Spencers Plaza on Mount Road (aka Anna Salai), the three year old City Centre at RK Salai and the soon to be inaugurated Ampa Mall near Anna Nagar. Bang in the middle of the city is the upcoming Express Mall (2010) – apparently spanning almost a million sft. Once opened, this would be the most populous place after the ever crowded T.Nagar! Traditionally, Madras has always been a “High-street” favorite for shopping. Even today, most of them are happy to hop shops on a single street – yes, they have upgraded from the best-bragain Ranganathan Street to the upmarket Khader Nawaz Khan Road that houses the Benettons and the Tommys of the world. People still take the effort to park their cars and bikes and walk to different shops to see the latest offerring. 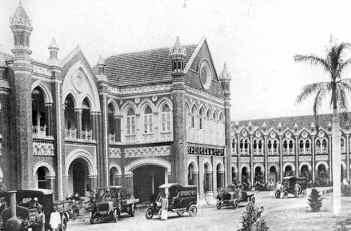 All said and done, Spencers is an all-time favorite. A historic name and a monument that it used to be, it was popularised in the 1980s by movie shootings and the actors and actresses being seen around; the original structure was supposedly burnt down many years ago due to an electrical short-circuit. And then a new structure was created in the early 90s. A modern shopping environment (not necessarily Organized Retail though) that had hundreds of shops in all sizes and shapes from 100-10,000 sft, early retailers in India such as Madura Garments, the RPG Group and even brands such as Levis and Titan were once anchors here. Today, they are still present – just “present”. Phase 1 is quite dilapidated and already showing signs of decay (literally on the walls in some places). Phase 2, that opened in late 90’s is a bit better, mainly having Pantaloons, Westside and Helvetica Watches as anchors. Phase 3 that opened a few years ago is a visual delight that shows the erstwhile Spencers’ external look, albeit the interiors are no more than plain walls and colors. A food court in the second floor draws some crowd, especially during lunch but otherwise there is nothing much that one could drive upto. 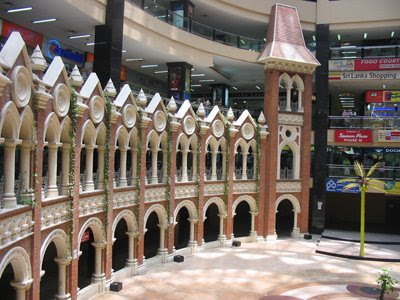 The only Retailer that still draws huge crowds is Landmark. When they opened in 2003, every Retail Entrepreneur, Manager upto the CEO visited this place to see how well it was conceptualized and offerred to consmers. Today, its pitiable condition is a question mark. If one could find his or her way through the maze of fixtures and furniture into the deepest corners and actually spot an SKU that they actually want, it would be a surprise. Unluckily, I wasn’t able to. The noise of the pedestal/wall mounted fans was higher than that of any music that was playing in the background. The A/C ducts were all there, but for some strange reason, not functioning (Govt. regulations on reduction on power consumption??). Seeing is beleiving – and yet there were no LCDs in the DVD section that were playing the trailers of the latest hot-sellers (if there were any). Even the twelve minutes that I spent inside the store was like an hour, given the situation. And while billing the only magazine I bought, one full song was played and completed on my pocket radio. Wish this place was better – so consumers were in a hurry to come to the store!
My next drive was to KNK Road – the mecca of the hippest brands. Tommy Hilfiger relocated themselves from their former location at Cenatoph Road to here on Thursday. Benetton is three years young now, so is Mocha – the hippest coffee shop in town. Zodiac, Wills Lifestyle and Allen Solly are among the oldest occupants on this stretch. Bong & Olufsen, makers of the world’s finest music players have a studio here. Esprit has recently occupied a superb property that once used to be a posh bunglow. Levi’s shut its outlet sometime ago due to scarcity of walk-ins but Subway and Barista around the corner are super-hits. And many more brands are awaiting their turn to open their Outlets here. Most Retail “pundits” (leasing managers – pun intended) predicted three years ago that every house on this road would be converted into a Retail store – which is not to be. There are not more than a dozen Outlets on this mile-long stretch, yet it’s the most popular shopping destination today in town.
At the entrance of this road, on the corner property, is a big board that claims “Coming Soon – Chennai Central”. This place is unutilized for over three years now, but am sure Mr. Biyani’s plans are intact. Look forward to another new one in the centre of the city, Sir. The Group’s first experience with a Pantaloon store in the early 2000s was followed by two more Big Bazaar Outlets only two years ago. When I asked him once why the group was so slow in this city alone – he smiled. And said, that this is among the most complex markets in the country. It was. It is. It will remain so. Who better than KB would know. 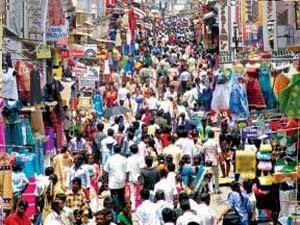 My drive to Thyagaraja Nagar or simply T.Nagar just proved that. The crowds that overflow the world-famous (pun unintended, really) Usman Road was a sight to look at. I am told by the traditional retailers here that the conversion rate in this locality is as high as 90% (A consumer here is actually a group of 3-4 people; that’s how people come to shop here). Although most Retail action here is around Indian Sarees, Dress materials and Jewelry (largely GOLD and SILVER, and a bit of others), all Retailers are decades old in the business. Modern Retailers/Brands haven’t been as successful here as their local counterparts - well, the market never welcomed or accepted them beyond a certain point. As always, even the restaurant that I went to did not have place for just four of us. And it was only 4.30 in the evening on a weekday! We went back home as we knew it would be the same elsewhere too within the locality. Someone said, err… Recession? Well. What’s that? Naaah… that’s a bit exaggerated. Even though the markets look full, they are actually one-third empty. This, again according to market estimates. However, with the wedding season around, shopping seems to be in full-swing. It is nice to see that only the bill values have come down, not really the number of buyers. Good. 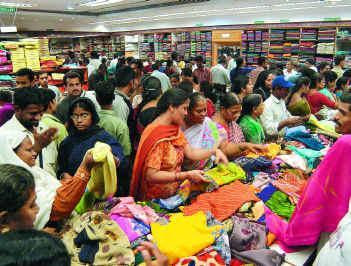 My last day seemed to be the highlight. Whilst I was recuperating with the high fever amidst some high-voltage antibiotics, my nephew called me to watch Sun TV. And… it was the all-time favorite Rajnikanth starrer Baba. I must share one of my well-guarded secrets now. When this movie released on Aug. 15, 2004, my friends and I went to see the first show on the first day (FDFS) – a craze that’s synonymous with most of us back here. The ticket that’s usually priced at INR 80 (USD 2) was “acquired” at INR 650 (we saved for six months to pay the premium!!). And then we were at the cinema – just to see all that hallucination and the exaggerated hysteria or fanism or fanaticism or whatever you would call in chaste “English”. For us, it was celebration and jubiliation. FDFS Thalaivar movie was once in two years and who would miss it. The storyline was based on the actor’s own life. 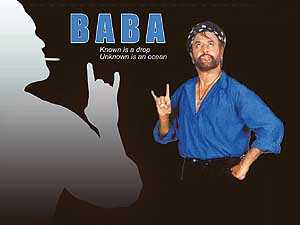 Beleivably, “consumers” rejected the movie and it was among the biggest financial losses in Tamil Film Industry’s 40+ year’s history. Rajni paid-up for the losses incurred by the distributors and created another history by becoming the most responsible actor/producer in this part of the world – something that was unheard of otherwise. Needless to say, that’s why he is nicknamed Super star. While it was time for me to take my train back to Bangalore, Rajni was singing (on screen) and I was humming,
“Uppitta Tamizh mannai naan marakka matten… (and I added)
Uppitta Bengalai naan marakka matten… Uppitta Benglurai naan marakka matten…”
That means I would never forget the soil that fed me – the Tamil soil, Bengal and Bengaluru… I am deeply indebted to these three cities – I grew up in Madras, started my career in Kolkata, West Bengal, and now living a satisfied life in Bengaluru!
Look forward to another off-beat vacation – most probably, Kolkata. Havent been there in eight years! Another exciting consumer market.
Another Retailer’s anecdote.
Keep watching this space.