When you mean Value!

Over the weekend, I visited the latest commercial addition in Bangalore, The Forum Value Mall at Whitefield (just a few minutes away from India’s silicon valley). Conceived over four years ago, the Value Mall was supposed to be Marathahalli (India’s largest Factory Outlet’s district) in a box! The Mall doesn’t have a common HVAC, which means that there is no air-conditioning, in the common areas, although every store is provided with individual facilities. The very thought that there wouldn’t be a common HVAC was a smart one, given the fact that the cost of electricity (and the running maintenance of equipments) forms the largest chunk of the Malls’ expenditure which in turn is passed on to the tenants as CAM (Common Area Maintenance). This was already tried by The Prestige Group who are the developers of this Mall, in their previous attempt - the EVA Mall on Brigade Road. So, it was possible to operate such a Mall in Bangalore where the weather is pleasant almost through out the year. 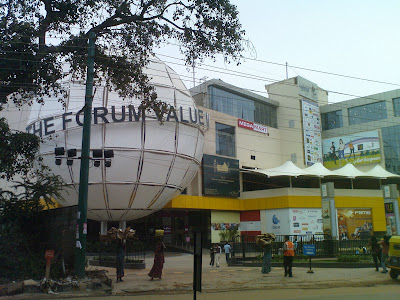 I remember (I used to be with Benetton those days) there was a big discussion among the Retailers’ community on the success of this model – whether shoppers would step in for such an experience. It was nice to see it live in action shoppers actually thronging this place, notwithstanding the impact of H1N1 flu (some extra-cautious ones were seen sporting masks too!). Although 80% of tenants have occupied and commenced business, some prominent ones are yet to.

The Mall is spread over 300,000 sft across four floors. MegaMart is the largest shopping anchor for the mall, while FAME Cinemas is the entertainment anchor. Tommy, Esprit*, Benetton, Nike, Reebok, Levis, Pepe, Lee, Neerus*, Bata*, Bulchee, Loot Mart, are among the other smaller outlets spread between 1,000 – 3,000 sqft. McD* (Ground Floor) and MTR* (First Floor), as F&B anchors, are expected to draw good crowds even during the weekdays. Cookieman, Daily Bread and Juice Booster, all F&B Brands again, operate on the ground floor – something that is usually unusual by Indian standards. The Transit food court with half-a-dozen operators including Subway, Pizza Corner, Mama-Mia Gelatos and other local delicacies, is already functional on the top-most floor. Two escalators next to each other in opposite directions are located at the fag end of the Mall on each level. Toilets are situated on all floors along with emergency stair cases. The most attractive element is the central Atrium spread over 10,000 sft and a sky roof – a tensile material that covers from the top such that rain water wouldn’t enter (hopefully) and would also provide natural daylight. The Atrium is also used for various promotions – temporary kiosks and as an inaugural attraction, there was some loud DJ music with other acts by artists – not surprising as this Mall is jointly operated by CapitaLand, which operates over a dozen Malls in Singapore where such things are common to see throughout the year. There is a specialty restaurant, Toscano (yes the same one at UB City) on the second floor, Sony Center, Onkyo Store, Access 2 Future (Computer peripherals and accessories), Whizz Photo Studio, Metro and Soles footwear, and even a saree and sherwani shop plus a Forex Money Changer! An entertainment zone for children is yet to open.
* The ones that are yet to be functional. 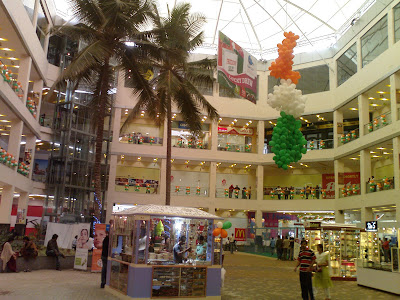 Ample parking is available (probably for over 300 cars) while the multi-level parking areas are two-ways, something that’s again uncommon in India. So drivers must be extra cautious especially when they take left-turns (that’s how the traffic is managed and a good thought again, given the fact that we are used to driving on the left). The most unexpected good thing however was “Free Parking” – probably coz the Mall is new and the Management is expecting to draw new crowds. Whichever way, it was pleasantly surprising to see that almost everything was so well organized. Great job done, once again and am sure they would keep up to their reputation – after all, the group manages the Best Mall in South India - The Forum.

Conspicuous missing includes an ATM/Bank, a Pizza Place and a Super Market. There is always a great round of debate on Super Markets at Malls – whether it would work – for the Retailer as well as for the Mall. Well, it must be remembered that the frequency of individuals and families visiting Supermarkets (in India) is about 4-6 times a month, which means that such an outlet would bring steady footfalls, even on weekdays. A Pizzeria (I mean the Dominos or Pizza Hut or the other new ones), although are present almost in every Mall are important crowd-pullers. A Bank would have also done wonders, probably facing roadside, given the fact that this is more or less a neighborhood Mall. An ATM with cheque drop boxes would have been useful for shoppers, especially the IT fraternity that spends more through plastic than paper. A 24/7 Gym would have brought in the health-conscious who reside in that area frequently to the mall! Who better knows that “Health is Wealth”. 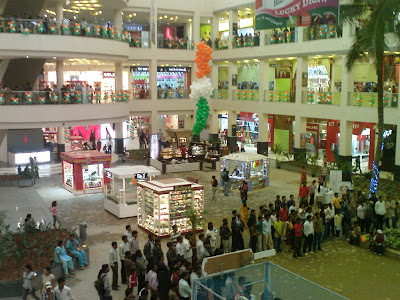 However, one cannot ignore the uncanny choice and placement of certain Brands – how can a “Value” Mall boast of a high-end boutique restaurant, an international QSR Chain, Ice-cream and Juices that’s cost over INR 60 for a portion (and that too in prime space). The argument that shoppers would come to shop their favorite brands at lower prices and would end up at the expensive food outlets is a myth – atleast as I feel. The Value and Brand conscious consumer who walks into this Mall to buy his favorite Tommy or Esprit is not the types who would spend INR 800 for a meal for two at the Boutique Restaurant or a similar sum at the Food Court for a family of four. Not that he/she doesn’t see value in it, ofcourse the food is awesome and of high quality but he’s probably not the best target. On the other hand, those who frequent such places may not be the ones to wear discounted stuff – two or three seasons old. Now, this is something I am personally waiting to watch – how consumers perceive this model. After all, Value for me is different than what it means for you. Let’s see.
at August 16, 2009