- December 26, 2009
I was shattered to receive a mail on Christmas Day - Friday the 25th Dec., from WorldSpace Inc. – that they will discontinue their services in India w.e.f. 31st Dec. 2009. More than the subscription money lost, I was pondering over the inability of such a service to sustain, especially in India. WorldSpace Corporation was founded in 1990 by Noah A. Samara, Chairman and CEO, with a vision to provide digital satellite audio, data, and multimedia services primarily to the emerging markets of Africa and Asia. To implement this vision, WorldSpace conceived and built the first ever satellite radio infrastructure in the world. In the past 12 years the company has built three satellites and launched two to provide audio, data, and multimedia broadcasting coverage to Africa, Asia, The Middle East and Western Europe. With the global headquarters in Washington D.C., Worldspace created the initial proprietary technology and programming infrastructure that both WorldSpace Satellite Radio and XM Satellite Radio are built on. In fact, 2003 saw WorldSpace Satellite Radio technology become the fastest adopted new consumer media in America since the DVD player. Until today, WorldSpace Satellite Radio provides 5% of XM Satellite Radio programming. JVC, XM Radio, Hitachi, and Panasonic are registered marks used with permission. In 2006, AR Rahman, India’s first Oscar award winner (2008) and Brand Ambassador of WorldSpace created a signature tune for the brand which was used extensively in its marketing and communication efforts. 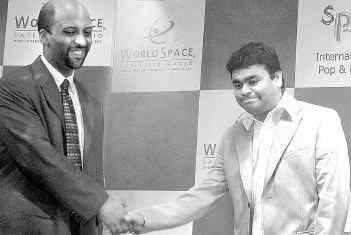 Although I subscribed to their service only in March 2009, I first heard WorldSpace way back in the year 2001 when I was working for RPG Retail. There was an exclusive arrangement between both the companies to play their music across the Foodworld stores in the country. While the idea was to familiarize shoppers with the concept of satellite radio, it was also a great advertising opportunity for the service provider. If one may recall, that was also the year when the Private FM Operators started their commercial operations (until then, the Govt. owned Prasar Bharti was operating the FM channels exclusively) across the key cities in the country and even today, only the Govt chanels can provide “News” content – a monopoly that the private operators are trying their best to break. There was (and still continues to be) intense competition among the Radio channels that today, people prefer to keep their personal radio on their mobile phones, their cars and homes tuned in all the time.

WorldSpace was, according to me, one of the best things to have happened in the field of entertainment. Using Satellite technology, one can carry the receiver anywhere within the country and to certain countries abroad, keep the antennae facing a certain azimuth (an angle at which the antennae receives signal from the satellite) and bingo – hear live content being played 24 hours a day… Of course, the antennae must always be facing the satellite in a particular direction and hence, it cannot be heard while on the move (like in a car). But WorldSpace had been working closely with FIAT in Italy to provide such a solution which was to be unveiled sometime next year. Until, it all fell apart. WorldSpace filed for bankruptcy in the US in Oct. 2008 and has now officially announced that it would be shutting down its services in India.

The crux of WorldSpace was its subscription based listenership. At the moment, India has over 300 radio channels (and increasing every month) which play regional languages as well as Hindi and English 24/7/365. As per the existing Govt. norms, the ad space should be around 20% of an hour’s airplay - that’s approx 12 minutes of advertising and the rate per minute varies for every city and the radio station. Assuming the average duration per song is 5 minutes, not more than 12 songs could be played an hour – but the stations modify the song (reduce the overtones) and create a playlist of 10-13 songs including advertising in between. For large cities like Delhi, Mumbai, Chennai and Bangalore, this makes so much sense as the traffic during the peak hours is very high and in effect, listeners get hooked to their private radio sets. Cut to contrast, WorldSpace offered over 55 minutes of music interrupted only by the voice-over of the RJs who explain almost every song – the lyricist, the composer, etc.

I believe the main reason for such a service to die an unnatural sudden death – is simply timing. Satellite Home Television has picked up in India in the recent years and has two dominating operators – Tata SKY and DISH TV with the new entrants Airtel, BIG and SUN entering the fray aggressively in the past 18 months. Viewers have realized that the reason to switch over from conventional Cable TV to the Satellite form is not just novelty, but actually the purpose – of no-interruption and absolute clarity while watching. What we haven’t realized is that we still pay for the subscription but are done to death with the advertising content – especially during festive days and special events like cricket matches and entertainment shows. The difference – WorldSpace was creating and hosting most of its programmes itself without any advertisements while the Satellite TV marketers buy the content from established TV Channels including the advertisements. And people have accepted the pay and use over the years while with WorldSpace, consumers were never fully convinced to pay for such a service.

One reason why WorldSpace is facing this destiny today in India where over 90% of its subscribers are based, is its positioning, the others being its location of hosting and points of sale. Clearly, the product (or service as you may call) was positioned as a one-up above the Radio over the years and there was probably not too much of an effort to take it to the middle-class masses. Unsurprisingly, Satellite TV marketing companies are selling their products at leading Retails stores in the country. A great example in recent times is SUN Direct Satellite TV. While they have done it to the extreme, by making the pan-wallahs and mom-and-pop grocers as their distributors, the strategy has somewhat paid-off. Contrast to WorldSpace, which made almost no major Retail presence except for a handful of distributors here and there ans some in-store Demos. I am not sure if they underestimated the power of Organized Retail today, but surely one didn’t see that approach. While subscribers to the service were acting Brand ambassadors (like me) who preached the greatness of the service, a new wanna-be subscriber never knew where and how to buy. Simply speaking, it was not available off-the-shelf at a Retail store nearest to you. And they were hosting the service from the US – I got to know this recently and am somewhat confused why they chose not to host from India.

I would assume that there is still a rebirth possible, provided the Brand takes a new approach and aligns itself with modern Retailers in India. There are over 5,000 Organized and semi-organized Retail stores in the country today and millions of shoppers visit these outlets every month. And that’s the opportunity. Whether WorldSpace (if and when it is reborn) or someone else in a similar segment will grab this opportunity is yet to be seen. Until then, WorldSpace – Rest In Peace.

Balakrishna Parankusam said…
Isn't this sad! The Worldspace radio service is one of the best, and sometimes we used to walk into the Spencer's flagship store in Spencer's Plaza just to listen to the music. When Giant Hyper (now Spencer's) was launched in Hyderabad, listening to the Jhankar channel was the best way to soothe our stressed out nerves. One of the faux pas of Worldspace was that it was played on a car stereo in the Bollywood blockbuster Munnabhai 2. This did arouse anticipation and I was hoping that the service will soon be available on mobile media just like Sirius and XM, but that was not to be.I am confident that it would be resurrected, and very soon.
Tue Dec 29, 02:33:00 PM GMT+5:30