It’s very Indian to gift – we actually do not need a reason to gift. Be it a birthday or an anniversary, new addition in the family or a new job, gifting is a given thing. So much so that a famous confectionery brand had launched a campaign a couple of months ago to gift chocolates during the beginning of every month – as one get’s his or her monthly salary! It is also widely believed that gifting existed in our culture for very long. For example in our Kannadiga culture, guests who attend a wedding are actually given some money and food on the last day of the wedding – the idea being that once they return home, they don’t have to cook food and the money given to them is for their conveyance back. Strange, but is still practised. They are also gifted clothing or cash equivalent during the course of the wedding as a token of appreciation of their visit and guests would even wear the same new clothes during the wedding. Similarly, we have many other examples in each culture and community.

In modern times, gifting has taken a different route. It’s quite common to see women shopping for their men – father, brother, husband or friend. And similarly, men shopping for women in their lives – mother, sister, wife or friend. So much so that luxury diamond brand “Carbon” successfully created “guilt-shopping” where men buy diamonds for their women without even understanding the jewelry – it was fashion jewelry and hence, not to much of thinking or analysis (like how women would do while buying jewelry) was required. And the result – the concept is a great hit and their flagship outlet is now at the “Bengaluru International Airport” where over 80% of customers are men! Although Jewelry, watches and accessories are quite common to purchase as gifts, consumers tend to weigh back on apparel. This is mainly due to size inconsistency among people and the brands and their fits. And add to that, color preferences. So usually, apparel is refrained from gifting, except for t-shirts and other fashion wear.

This is where the concept of “Gift Vouchers” fit in. It’s quite common to see today people rushing to buy such vouchers from leading retail stores, especially Department Stores and Mono Brand Apparel/Accessories Stores. A few years ago, the Future Group introduced “Central Vouchers” which could be redeemed across the Central Malls in the country and sometime ago, launched vouchers that could be redeemed at their home improvement retail concept – Home Town. Even café chains like Café Coffee Day have vouchers that could be redeemed across the 800+ outlets in the country. If there is one segment where it is not yet present in full measure, it’s probably at the Supermarkets. However, these vouchers are usually sold through institutional sales – typically a B2B activity where the Retailer sells the vouchers at a discounted price to Corporates who in turn pass them on to their staff members on special occasions such as birthdays or anniversaries. And the common belief is that the user would buy more than the voucher value and the retailer would benefit from it. Well. If only it was so true! My friends in the business would agree that while the redemption is sure, the difference in the final purchase price and the cost of the voucher is not very high. It could also be because the consumer didn’t find anything as exciting or the validity of the voucher was shorter and he/she didn’t have anything to buy at that time.

While Shoppers Stop has created a big opportunity among its customers through branding and communication measures, many retailers haven’t done this yet. I would rather say, they haven’t “tapped” this yet. Imagine, Christmas and New Year is around the corner and you may want to be gifting something to your loved one – but may not know what to. So, that’s where the Voucher comes in. But do Indian consumers believe so? Probably not. And the reason is simple. When you buy a product and gift, it is generally perceived not to be valued monetarily. For example, if your give a flower bouquet and a vase, then there is no value that is attached. Instead, if you give a 500 Rupee voucher, then the receiver would “feel” the value of the gift – something that is not very much in our culture. Although, we contradict ourselves a bit in reality. In Indian marriages, its quite common to give some money as gifts. Probably for other occasions as well. This is usually instead of a product as gift. While this is commonly accepted, Retail gift Vouchers are not. Reason? They are probably not so well marketed. Starbucks recently had a scheme where when a person buys a gift voucher, the buyer gets rewarded… So, with a US $ 100 voucher, the buyer gets a US $ 20 voucher – that’s a 20% Discount. It still works to the benefit of the café chain as they make higher margins. This could be a bit of a challenge for traditional retailers but still, certainly worth a try. 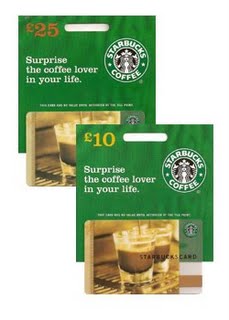 And the key to this is marketing and communication. The concept must be communicated to potential consumers in such a way that it induces them to buy gift vouchers. I am already dreaming of a day when consumers would flock to their favorite Retail stores to buy vouchers during a particular day or week because of attractive offers like how they now buy during the End of Season Sale. I would imagine that consumers would stock up these vouchers at home and would use it as and when an occasion arises. Or they would find one where they could gift it. Whichever way, gifting is good – brings a smile to the giver, a bigger smile to the receiver and yes, helps us, the Retailers. 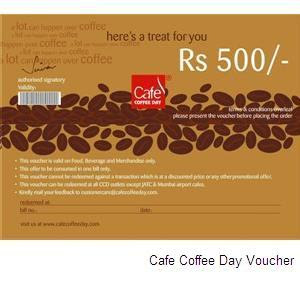 So, whom are you gifting this festive season? Make a list and remember to count me in…


What promotions are you running at the moment? How far these coffee vouchers are successful in the Indian market?

you cover up all the major retailers GV detail of B2B, but i doubt that Coffee shop GV will do well in india compare to lifestyle format such as shopper, lifestyle, central, pantaloon, globus etc.... it will take some time to accept by comsumer, secondly, coffee shop have limited TG Compare to other retialer,

Gifting is an universal phenomena. And sometimes, as Shreeram right pointed out, one does not need an excuse to gift.

I am not a big fan of buying gifts for someone's marriage or anniversary. I would rather give them gift vouchers from retail outlet closer to their place of residence. An acquaintance of mine was gifted 4 crockery sets for his marriage and he is still busy "recycling" them. This reminds me of an ad which was aired couple of years back wherein the couple who started recycling a particular gift, ended up receiving it again from someone else.

Retailers should go in for creative marketing of their gift vouchers. For example buy for Rs.5000 during the off season sale and get Rs.500 gift vouchers for purchase during the regular sale. This would ensure a spurt in walk-ins and also conversion during the off-peak sales cycle.

Starbucks has a loyalty card which doubles as a gift voucher, this loyalty can be "loaded" with points which the "gifted" can use them.

Retailers should give surprise rewards to regular shoppers. This creates excitement and repeat purchases which is important in today's tough retail business where lines of differentiation have more or less been erased.

I have bookmarked this article , coming up with something in gift vouchers space .