Talk of global warming and every one around seems to have one common observation – winter this year is quite peculiar with unusual chillness during the nights and sharp sun rays during the day. I felt this myself when I was in Delhi last week. Thankfully, I was carrying a blazer at the insistence of my colleague, lest I would have certainly caught up with severe flu. Delhi winters are famous for their biting cold – in India, that’s 2-3 degree Celsius. (which is not the case in the US or in Europe!). During the months of Oct – Jan, sales of winter related merchandise see an increase substantially and premium brands such as Benetton and Tommy take advantage of this by bringing some of their iconic international collections that are otherwise non-saleable in Indian conditions. Sales of cold drinks, colas and even ice-cream take a dip during these months and the Brand owners try several promotions to entice consumers to buy their products. While it is usual for consumers in the western world to have ice-cream during winter months (temperature sub-zero), it is not the case in India. I remember the long discussions that we used to have while I was in Bengaluru International Airport – to have or not Ice-Cream as a concept as the sales in winter months was less than half the average in summer months. Though it made business sense (the summer’s steep sales offset the losses in winter), it was always a question on top of mind. 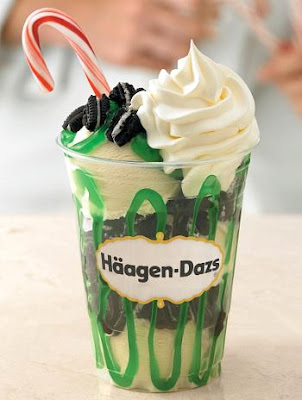 Branded Ice-Cream market in India, according to various estimates is in the range of INR 800 – 1,000 Crores and the super-premium bit is about 25% of the total. Haagen Dazs is the latest entrant in the market with its Indian franchise partner and is expected to open its first outlet in Delhi in Dec. 2009. Although the ice-cream varieties were present in India through gourmet stores and restaurants since quite sometime, it was out of reach even for the discerning middle-class due to its upwardly pricing, that’s 2-3 times than its Indian counterparts. This is mainly due to import restrictions, like in many other products that are brought into the country. The history of Haagen Dazs dates back to the 1920s when Mr. Reuben Mattus, the founder, worked in his mother's business in New York, selling ice-cream in horse-drawn carriages. Later, he spun off the business into a company and named it Haagen Dazs. The business grew rapidly and spread globally as distribution logistics and popularity of the brand increased. In 1983, Haagen Dazs was bought over by the Pillsbury Company of the US. Haagen Dazs has a range of traditional ice-creams, frozen yoghurt, gelatos, sorbets and frozen ice-cream bars in its product range and is the most favorite ice-cream for the Americans.

The prevailing popular international ice-cream brand “Baskin Robbins” story in India began in 1993, when it opened its first store in Mumbai. Today they are spread across the country with more than 300 outlets in over 60 cities and catering to other premium channels like star hotels, leading airlines, malls, multiplexes and top retail chains across the country. The Baskin Robbins story began with two brothers in law- Burton – “Burt” Baskin and Irvine – “IRV” Robbins. Burt and Irv strongly believed people should have choice, so they offered 31 flavours - one for every day of the month. And they believed people should be able to try any flavour without cost - a belief that led to the iconic pink spoons. Their ideals live on at Baskin-Robbins even today, where they now possess a flavour library that consists of more than 1,000 ice cream recipes. By the way, I used to be a scoping boy at Baskin-Robbins in Madras 14 years ago – my first job to say so! In my experience, 7 out of 10 customers who tried the ice-cream actually bought it. Those days, a scoop of 33 gms of ice-cream used to cost INR 45.00. And the sales were not bad at all. The franchisee used to make us try a scoop everyday (on the house) so we actually knew what it felt like and we could convince our customers to buy them. That parlour shut because a flyover construction began on the road opposite to it and the Location which was once considered lucrative turned into a dead spot. 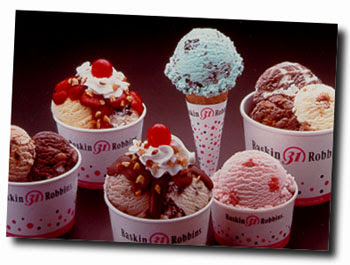 Ice-Cream in India is available from as low as INR 5. Many local brands – some even city specific have been quite successful in this aggressive, yet challenging market. AMUL, part of the Gujarat Cooperative Milk Marketing Federation is the single largest popular Indian brand of ice-cream that’s available across the country while ARUN ice-cream is market leader in South India. McDonald’s single scoop is affordable available although only at a few places across the country. Walls, from Hindustan Unilever is the most popular packaged ice-cream brand, mainly drawn by the distribution strength of the core business. Nestle SA, which recently bought over the Movenpick Swiss Ice-Cream brand has not launched it officially in India although the previous India franchisee has several outlets across the major metros, many of which were shut due to poor patronage.

So, there are two main challenges in this business – Price and Climate. Even if one is favorable, there is no surety of success. And between the two, it’s almost impossible to say which one is riskier. Given the scenario, the big daddy of the business is venturing into India during the infamous Delhi winter with the highest price per ml. Bravo! I hope this venture takes off well, like how they have in many other countries. My sincere best wishes.