Air Travel in India is picking up slowly, but steadily once again, and this is visible in the numbers reported by International and Indian-origin Airlines and Airports over the last two quarters. For a 12 month period ending Sep. 09, over 90 million people took to Indian skies - that's a mindboggling 250,000 people every day. This includes departing and arriving, domestic and international passengers (pax.). 75% of pax are domestic while the rest are international - and that's approx. 190,000 pax. In this, over 40% fly Low Cost Airlines; that's over 75,000 pax everyday.

Low Cost Airlines have been confused with Low/No frills airlines in India. Globally, No-Frill Airlines such as easyJet and Ryanair do not provide many services on ground and on air to pax. Their turnaround time (duration on ground at the airport between a landing and take-off) are minimal, between 40-50 minutes per location and the aircraft spends more time on air (hidden from the public eyes) rather than being seen on the tarmac, more as an advertising and brand-building activity, like the Legacy carriers. Legacy carriers or full service carriers operate on a hub-and-spoke model - they bring pax. from several cities and pass them on different flights to other cities; and are those which provide a host or services such as check-in & security check assistance by ground staff, lounges for pax. of various seating classes such as business, economy, etc. and F&B on ground (in case of flight delays) as well as on air.

Low cost carriers actually focus on "lower cost of operation" which means leaner staff on ground and on air. These airlines encourage pax. to check-in before they visit the Airport or to use the self service kiosks rather than the manned counters which are fewer in number and take more time. Ever since the launch of Air Deccan, the low-fare regime started in India. Although the airline followed most principles of a Low-Cost airline, it was also instrumental in bringing the "price-war" between the airlines. Suddenly, the big boys were offerring throw-away prices that the common man grabbed with ease and hapiness. One merger, one take-over followed and a few closures are in the offing. But even these airlines may pull off with the increasing domestic air traffic. So, Low-cost airlines and Low-fare airlines are not to be confused really. 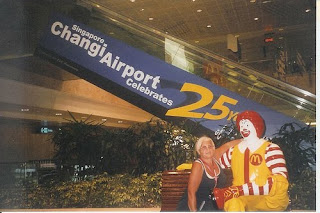 Aircraft food is generally abhored by frequent travellers (by popular definition, these are pax. who undertake over 12 trips a year) and prefer to eat at the Airport Terminals or outside. These are also pax. who are considered to be well-traveled and a bit more evolved than their counterparts in understanding and appreciating the Airport F&B offerring such as variety and quality, not to mention the superior Customer Service (in comparison to what was available earlier). In many parts of the world, it's quite common to see Starbucks, McDonalds, Illy and many international brands at airports which provide the continued offerring to its patrons. However in India, this trend is quite new, probably a few years now. The first few organized F&B retailing outlets were commenced by India's largest chain, Cafe Coffee Day - with outlets across over 35 airports, this is the largest Travel Retailer in India at the moment. Mumbai CSIA, India's busiest airport where I was passing through today has over 11 touch points across various locations.  Organized retail footprint at Airports was pioneered by Bengaluru International Airport when it was under planning and construction stages between 2005-2008 where Cafe Coffee Day operates three outlets. 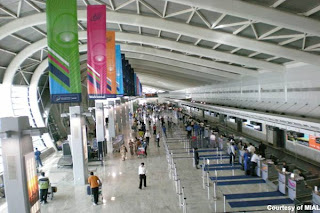 With over 75,000 pax. who fly Low cost airlines which do not provide (complimentary) F&B on board , that is already a huge market potential. Assume 30% of these pax. would consume at Airports and if each spends INR 100 per visit, the total turnover is approx. over INR 25 lakhs everyday! And among the rest, if 50% of them, ie., 25,000 pax  spend INR 40, that is over 10 lakhs. And such multiplication (which is not complex) is anyone's guess while using some common sense and a calculator. However, the BIG picture is the impending F&B opportunity at airports. Today, more and more passengers, irrespective of whether they fly Legacy carriers or Low-cost, are preferring to consume at the Airports. Bars and Restaurants are added attractions and it is quite common to see pax. arriving early to the Airport to have a quick bite of their favorite food or to have a drink - one for the runway! as I always say. 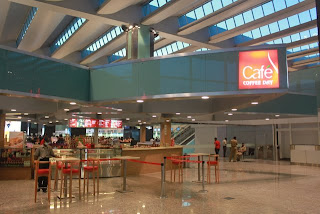 With more and more newer air passengers getting added everyday, this is one opportunity that cannot be missed. And Cafe Coffee Day would only continue to lead the way!