When LOOTing is legal and fuels consumption

- November 27, 2009
This article comes after a long gap - mainly due to my hectic travel over the past week to the two most important markets in the country, Mumbai and Delhi. There is something very special about these two cities, the former is the financial capital of India and the latter, the political capital. (And all the states and their capitals beleive they are "the nerve centres" to the administration of governance in the country! hic). Both cities and their suburbs have a population of over 15 million people and growing! A great boon to Retailers of all shapes, sizes and pedigrees. During peak hours, the average time taken to commute from work to home and return is approx three hours in Mumbai. Both cities have the most terrible public transport systems which makes the usage of personal commute almost a necessity. So, higher sales of cars, car tyres and car freshners - with Godrej Ambipure leading the market with over 65% share. Delhi Metro is a saving grace and the new extension to Noida has been welcomed graciously by commuters. The influx of people from neighboring cities and states is so high that there is almost no control of who lives where.

The sheer number of people is such a great opportunity for us in business. While this is not specific to only these two cities, there is something special about consumers here. Most forms of modern retail were experimented here and have only proved successful that they have been replicated all across the country. And one such format is the Discount stores. Typically in Apparel and accessories. While the format is quite famous all across the world - even Hugo Boss sells on discount at Metzingen - it is quite recent in India - probably less than a decade. While it is a bit difficult to say which Brand/Retailer first established this concept, the biggies have been on it for quite some time - Madura Garments, Arvind Mills and other popular Indian and International Brands and smaller retailers. In the fashion apparel and accessories business (including where the brand is franchised), the franchisee usually pays the full cost price and buys the products from the Brand, on which he enjoys a margin of 20-55%. After the season is over (Spring-Summer from March to Aug and Autumn-Winter from Sep. to Feb.), the products must be marked down and sold as they cannot be carried over to the next season - simply because they are usually not the fabric that could be used. That's how the End of Season Sale or EOSS came in place. The average discounting for most brands during the EOSS is as high as 35% and what remains after the sale with the retailers is less than 10% of the original stock. 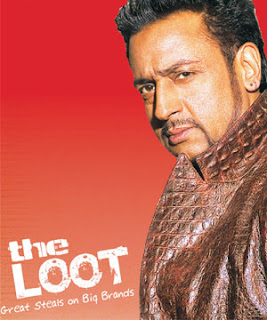 These usually remained with the Retailer for sometime until they were sold out. And that's where someone found an opportunity - to create seperate stores that could sell these merchandise at discounted prices throughout the year. If they were closer to the downtown stores, then the full-price business would get affected, hence they are usually located in the suburbs or outside the city. The stores are quite basic - no air-conditioning, no great fixtures and furniture, simple lighting and minimum staff. The cost of operation is very low since the margins are also low - between 10-15%. Consumers take an effort to go all out to shop as their savings in lieu of the effort taken is well deserved. One such Retailer in India is The Loot. Founded in 2004, this retailer opened its 100th store in Bangalore in May 2009 and currently has over 120 stores across the country with plans to cross the 200 mark in a year. This retailer roped in Bollywood's infamous bad boy Gulshan Grover as its Brand Ambassador with the store resembling doors and images of a jail. And the store aptly named The Loot with a rug sack pic along the main logo. 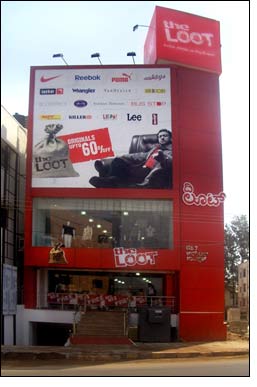 Last week, one of my cousins wanted to buy a shirt quite urgently and it was the only store located on the way while we were driving on the outskirts of Mumbai, at a place called Thane. Not that he was looking for a discounted product though, but we ended up here. The store has special schemes - Buy one and get one for free or Buy at 40% discount, etc. The store, which appeared like a franchised one had popular apparel brands such as Louis Phillippe, Arrow and other lesser known brands, and even stocks luggage, hand bags, belts, deodarants and perfumes. While my cousin had gone with an intention of buying just a shirt, he ended up buying a matching pair of denims as well... all in span of less than 30 minutes. And we were not alone; on a Sunday afternoon, there were atleast 5-6 families shopping together. We ended running a huge bill but when we walked out, it did seem like it was indeed a loot.

There are several lessons here - In India, families shop together. So, there must be something of interest to everyone - atleast to keep them engaged while the others in the group are shopping. Next, locate the store as close as possible to the consumer. If not for anything, they would end up just because the store is closeby or on the way. Adequate parking and management - a great boon to shoppers. Last but not the least, rotate merchandise as often as possible, what we call as Stock Turn. Even if it means selling at a lower margin, atleast the cost is recovered and there is fresh cash flow for new merchandise. Afterall, sometimes such a loot fuels consumption and brings back people seeking more.