- January 10, 2010
The Indian Ministry of Tourism recently announced Visa on Arrival for residents of Finland, Japan, Luxembourg, New Zealand and Singapore – a move which was debated so much that the Hon’ble Minister of State for External Affairs Mr. Shashi Tharoor even tweeted about the topic, which was covered more in the media than the Visa news itself! The visas would have a maximum validity of 30 days with a single entry into the country which will be restricted to airports at Delhi, Mumbai, Chennai and Kolkata. The four airports account for over 65% of Indian aviation – of the over 110 million pax who fly within and outside the country every year. Whether there are enough takers from these countries is anybody’s guess. But it’s a welcome move, many say. Martin Moodie, founder of The Moodie Report, the world’s most read Travel Retail website that never sleeps, remarks “Obtaining an Indian visa is a notoriously unwieldy process”. He couldn’t be wrong. He travels all across the world for over 200 days a year and visits India atleast once each year. One of my good friends in the Industry and a mentor of sorts in my professional life, Martin Moodie blogs regularly about his experiences across airports and the Travel Retail business in general. Apparently, the number of Japanese visitors into India grew by 3.5% in 2009 to 151,000. Understandable, since many Japanese Auto companies, Suzuki, Toyota and Honda, command a respectable market share in India. While Suzuki (with a JV with Maruti) holds the fort in the mass segment, Toyota and Honda slug it out in the premium segments and are famous among the Sec A+ and A in the large metros.

So what does it mean to have “Visa on Arrival”… Aplenty. To begin with, it is seen as a country which welcomes visitors. Thailand and Malaysia have been doing this for sometime now and have seen noteworthy results. While the domestic unrest in Thailand did crash the visitor entries in the first half of 2008, the tsunami after effect in 2006 and early 2007 was severe in Malaysia – a country which has a tremendous tourism potential due to its unending sea shore. They are also inexpensive for those from the West and the Pacific as the Dollar conversion works very well – from coffee to cigarettes, from luxury stay to gourmet food. India has taken a giant leap in 2010 by announcing this major initiative, kudos! The move is expected to help the country’s economy to a large extent and how.

One of my presumptions after the Congress Party won the Parliamentary Elections in Summer of 2009 was the main focus areas – Tourism and Infrastructure. And this is exactly what we are seeing. While Infrastructure Development is the mantra all around, the Tourism impetus has been doubled, the least to say. Wish the same focus remains on developing Domestic Tourism as well. The website of Incredible India is not just attractive, but quite informative, exhaustive and engaging as well. And is the entry point not just to India, bit for all those who are looking for information about Indian Tourism. 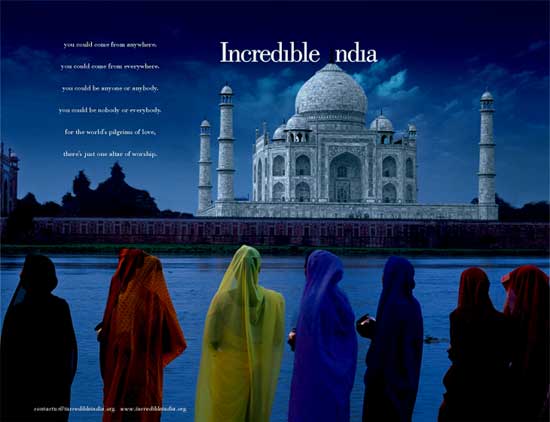 And with growing Tourism, Retail is sure to benefit in a big way. Global tourist destinations have tourists visit their Malls and Shopping Centers as much as the city residents.

In fact, certain products are always considered to be cheaper in foreign countries – possibly because they are either manufactured there or the country allows cheaper or nil import duties. For example, coir and jute products are famous in Thailand just as Dry Fruits are in Dubai. International Fashion Brands are always the pick of the place at Singapore and Hong Kong. Except for Mangoes and Tender Coconuts during summer and woolen clothes from Punjab and Cotton produce from Tiruppur or Surat, there is little that we have to offer that tourists can grab. But there is enough and more of tourism potential to offer across the country, throughout the year. From Deserts to Sea Shores, from Mountains to Fashion Capitals, India has everything to offer. And while people travel, they are bound to consume. It’s just a matter of time, that we see an uptick in Retail Sales due to foreign travelers. But it’s sure bound to happen, sooner than later