- February 14, 2010
One of my previous columns claimed how this place would change the way Bangalore shops. It's only reassuring to see how true my own words were. Bangalore CENTRAL 2 at JP Nagar, Bangalore South, has indeed realigned the city's shopping needs. During my visit a week back, the new food court aptly named Foodstop! had opened its doors for public. And no better timing than during the Happiness Sale - a biennial celebration that offers upto 51% Discount across various product categories. The Central Sale which is as popular as the End of Season Sale from Shoppers Stop (more of that on my next column) is a huge hit among consumers across cities. Central Malls, which is now present at eight cities across the country, offers shoppers a unique shopping experience that includes great offering with amazing discounts - twice a year. So, if you haven't been there yet, rush NOW. 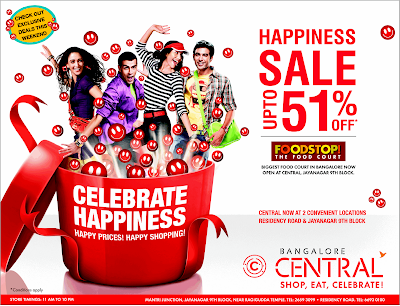 The foodcourt is located on the fourth floor, where the Box Office (the ticket booking counter) for the upcoming Cinema would be located. So, all patrons who wish to watch cinemas must pass through this floor - a brilliant idea to get footfalls into the foodcourt that would show results in a few weeks when the cinema opens. The foodcourt is well spread and brightly lit and has a busy neighbor - F123, a play area for children and the ones at heart. I beleive there would be atleast 100 seats or more for the six/seven food counters in the area. What I loved the most is the wide offerring - from continental to kannadiga fare, there's everything that discserning food lovers need. What I am bit confused is their adjacency. Will seek answers for that soon from my friends at Central. 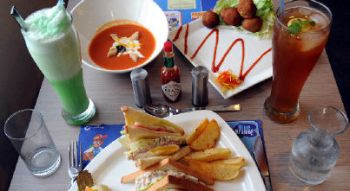 The first counter serves Juices and Ice-Creams. In a way this is the last one too. I wonder why this is the first. But maybe there's a reason. The pricing is moderate and the selections are wide. The next one is Bombay Blue, the flagship F&B concept from Blue Foods, which manages various other concepts all India such as Noodle Bar, Cream Centre, etc. and is also the one that runs F&B across various Indian airports such as Mumbai and Delhi. The menu offers lip-smacking continental food varieties, including Soups, Pastas, Sizzlers and the signature "Sizzling Brownie-Ice-Cream", my all-time favourite just as many of you. The portions are large enough for one person and the pricing is aggressive - just as compulsive to make the first-timers try. The next counter sells Indian fare - Rotis, Kebabs, etc. Nothing much to say as it includes almost everything that one needs in this variety. This is followed by Subway, the only branded counter (which was yet to be operational (as of 6th Feb. 2010). And this would be managed by my good friend Griffith David, a US returned techie who's passion to food led him to enter the F&B business a few years ago and is now one of the largest franchisses in South India for Subway and Baskin Robbins and is also opening some of his own concepts, and operates his flagship Subway/Baskin at Bengaluru International Airport since May 2008. My best wishes to him as this is his first in a Mall. The next counter serves traditional south-Indian/Kannadiga fare including various varieties of Dosas and Idlys. And the last counter serves tradional north Indian chat varieties. 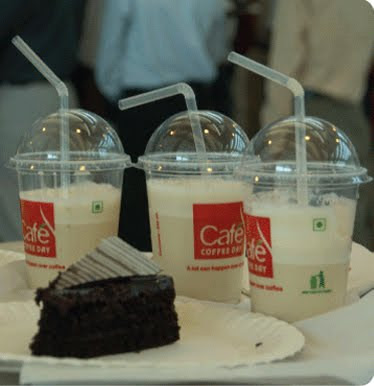 However, the missing counter is a Cafe - yes, there is no coffee and beverages available in this floor. I beleive Coffee and short-eats would do well in such food courts that offer continental/western style food as it goes well with such a menu. I am trying my best to fit in one of our cafes there, but yet to see light. However, Cafe Coffee Day is located next to the customer Helpdesk in the second floor , which is mainly targeted towards the youth and offers casual wear clothing along with E-Zone, the Electronics format of The Future Group. The 200+ car parks in the basement ensures that there is enough space for those who drive in, apart from a similar number for bike parking. And there is a new unoffical Auto-stand just outside. this makes the visit to this mall an easy access, one of the most important moments of truth in retail. 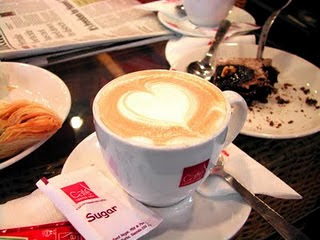 What I love the most about Foodstop! is the variety and range with superb pricing. A family of four could have a sumptuos, tasty, affordable meal from across the world for not more than Rs. 400/- (USD 9) which is a rarity today in Bangalore. Kudos to the Central Team for putting up such a fare.