I was among the few fortunate to be present at the recent unveiling of the identity of the most promising retail venture of the century – I am not exaggerating… indeed, it is. I am referring to the upcoming new Terminal 3 at Indira Gandhi International Airport (IGIA), Delhi. The Terminal Building spread over 50 lakh square feet would be able to cater to over 30 million passengers per annum (mppa) in 2010 and would be able to scale upto 54 mppa by 2020! By far, this would be among the top five biggest airport terminal buildings in the world and possibly the biggest in India. The Airport is ably managed by the GMR Group – leaders in Infrastructure, Power, etc, who also manage the Rajiv Gandhi International Airport at Hyderabad. Many would know that recently, the Hyderabad Airport was ranked the fifth best airport in the world in the five-fifteen million passengers a year category. The council, an international association of the world's airports, has also ranked the IGIA as the Best Improved Airport in the Asia Pacific region. All this, thanks to the persistent efforts of the GMR Airports Team, ably lead by none other than Mr. Kiran Grandhi, Chairman, GMR Airports Division. 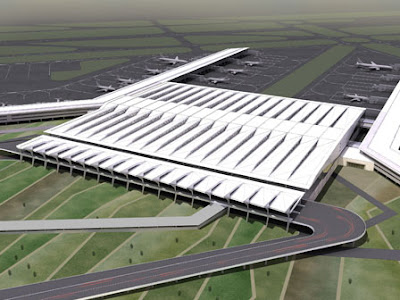 The new Terminal 3 which had a different Retail Identity earlier now has a new one developed by Holland based Marketing, Branding and Communication agency THEY. The new identity efforts, apart from choosing the Retail and Commercial partners, has been led by Suredj Autar, Chief Commercial Officer and Head of Strategic Planning for GMR Airports, The two day event was chaired on Day One by Mr. Martin Moodie, founder and editor of The Moodie Report, the world’s most trusted travel retail news website that never sleeps. Martin introduced Suredj as Supersonic Suredj - “He’s an ebullient, live-wire, irrepressible character who knows only one speed – supersonic.” Indeed, he is. I have known Suredj for over four years now since his previous role as Managing Director of HMSHost when he launched the operations in India and led other initiatives in the Asia Pacific Region. 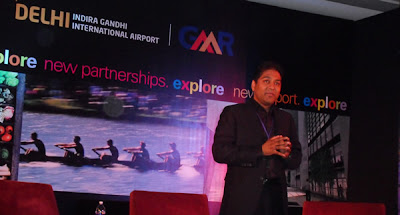 Back to the retail identity. The Dutch agency THEY’s founder Van der Vorst remarked - “For us, Explore exactly captures the diversity and forward-looking way in which India is progressing – and at the same time it’s a promise, a link to the customer; an invitation to the customer to explore all the great things that can be found in an airport.” The colorful logo was also unveiled and the various commercial partners would be able to integrate the new identity with their own, whether it’s a store that sells books, music, duty free products or coffee (like Café Coffee Day). What I loved most about the new name is its flexibility – it goes well with almost every category!

The Retail areas are spread over 2 lakh square feet (that’s as big as a Mall, someone remarked in the audience). The retail areas have been carefully planned across the domestic and international areas. The common check-in area would have over 100 counters that could be used interchangeably for Domestic and International Airlines (similar to how it is at Bengaluru International Airport where I worked earlier and which introduced this concept two years ago). Focus has been given to walking areas, seating and shopping/dining areas such that each of it is visible from the other. So, when a passenger is walking, he/she cannot miss the shopping areas and the seating areas are close to the dining areas. While most of the shopping areas are on the same floor when a passenger enters, the food courts are a level above. There are two premium coffee outlets planned – a Coffee Day Square in the Domestic Departures and Coffee Bean Tea Leaf in the International Departures. And expect a host of F&B options – from Subway to Mc Donalds, Chinese delicacies to local cuisine, there is everything for everyone’s pallet. The Retail areas would sell almost everything possible, including an exclusive area for Luxury Retail and the highlight is going to be the much expected “Dilli Bazaar”, an area that would focus on the local favorites from the city.

Later in the evening, there was a cocktail, sit down dinner hosted by none other than the Chairman himself which was preceded by a short interaction. When Martin Moodie who was on the stage with him asked how good the new Terminal 3 would be, Mr. Grandhi promised it would be 10/10 to a thundering applause and cheer from the crowd. When I met him later in the evening to introduce myself and to shake hands, he got up from his seat with a smile – a charming gentleman that he is, I couldn’t have expected more! His effervescent personality resonates in his organization and his team. Everyone was so cheerful and enthusiastic and like them, I am also eagerly looking forward to the grandest retail opportunity of our times… Watch this space for more updates over the next months.