Mohandas, Mont Blanc and the Mahatma!

An eye for eye will make this whole world blind, said Mahatma Gandhi. Kamal Hassan, ace actor/director of Tamil Cinema recently co-produced a movie titled “Unnai Pol Oruvan” which translated in English means “Someone like you”. The movie is a remake of the recent Hindi super hit movie “A Wednesday”. The protagonist plays a dark role throughout the movie, only to reveal in the end that he was just reacting like a “stupid common man” scared of his environment who demands the Commissioner of Police of the city to discharge four terrorists only to kill them himself through a bomb explosion triggered through a mobile phone from a remote location. Interestingly, one of the characters is named “Karamchand” who plays the role of an “arms dealer & smuggler”. Kamal Hassan, who holds the world record as a male actor having played maximum number of roles, ten to be precise in the 2008 super hit Dasavathaaram (meaning 10 roles) has conspicuously named this character so. Many would know that “Karamchand” is the middle name of the Mahatma, which goes like “Mohandas Karamchand Gandhi”. When I saw this aspect on the movie, I was happy that the movie released two weeks before the Mahatma’s birthday – Oct. 02nd as I thought it was an insult to use the name of the Mahatma for a smuggler and a supporter of terrorists (even though it’s just a movie!). Kamal, 56, who is celebrating 50 years in Indian cinema, always had a different take on the Mahatma’s approach – of non violence and abstinence. In his previous movie on a similar subject “Hey! Ram” (the last words uttered by the great soul after he was shot dead by a Hindu sympathizer who along with many others believed that the Mahatma was solely responsible for the partition of India and creating a new entity named Pakistan) the hero goes to actually kill Gandhi. But before that someone else shoots him. It’s a shame that the legendary actor took this approach in his recent film where he propagates that the answer to terrorism is counter-terrorism. As actors, what they say is what they feel and hence, it is obvious to assume that this is the actors’ personal belief too. 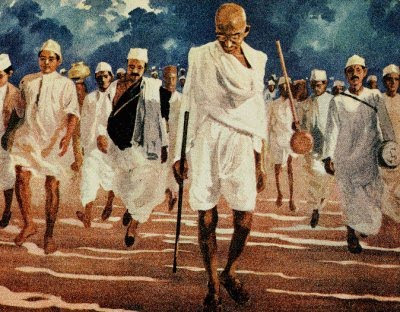 While the whole country is getting ready to celebrate the Mahatma’s birthday next week, an international brand has used (or rather abused) the Mahatma’s name once again. After all, Luxury and the Mahatma do not go hand-in-hand. Gandhi, popularly known as the “Father of the nation” was a Barrister-at-law, worked abroad, returned to India and fought for India’s Independence. He believed that “non-violence” was the only way to fight or protest; His “Quit India” movement against the British was the turning point in the 200 year history of India’s freedom struggle and successfully ensured the country attain Independence at the stroke of the midnight on Aug. 15th, 1947. In the last part of his life, he wore only handloom products – a dhoti (wrap around) and a towel made of cotton (a natural fabric) while he and his supporters used the famous charka to loom cotton at his ashram near Sabarmati in Gujarat. He believed in simple living and intellectual thinking. While he never restricted his followers or well wishers to wear or use expensive products, he himself never used any such thing in the better part of his life. World’s leading maker of luxury writing instruments Mont Blanc has announced the launch of the “Gandhi Limited Edition” in two collections, one that has 241 pens and the other 3,000. 241 is the number of miles that the Mahatma walked during the “Dandi march” over 24 days – he was protesting the salt regulation by the British and undertook a padayatra or a walking march from his Sabarmati Ashram to Dandi. And the other collection has 3,000 pens, the number of followers who joined him in this march. In the 241 collection, the pens are made of White Gold with 18K Gold threading and an Opel stone on the clip, which costs INR 11,39,000 (USD 23,729). The Luxury Brand promises to donate INR 50,000 (USD 1,040) for every pen sold to The Red Cross Society. In the other collection, every pen is made of Sterling Silver, Ivory lacquer and a garnet stone on the clip. While the Roller Ball is priced at INR 1,47,000 (USD 3,063), the Fountain Pen is priced at INR 1,67,000 (USD 3,480) and even has an imagery of the Mahatma on its gold-plated nib! The Brand promises to share INR 10,000 (USD 208) for Child Literacy for every pen that is sold. While half the total production would be sold all over the world, the other half is available across leading Mont Blanc boutiques in India. During a press conference in the first week of October ‘09, the Luxury Pen would be officially launched by the Brand. 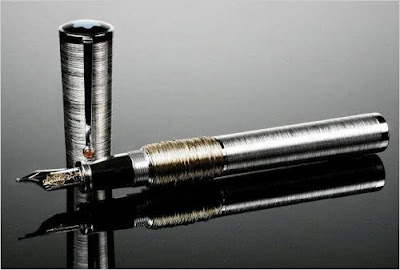 While I have nothing against the Brand (I am myself a connoisseur of the Noblesse Oblige Roller Ball, an awesome Meisterstuck Visiting Card Holder and a Pencil and spectacle frame in the offing), I am surprised that the over-100 year old brand which is synonymous with “High Quality Writing” has taken this approach to make inroads into India. While I wouldn’t be surprised if this collection gets completely sold out in less than a year, I am yet to come to terms if this was the best approach for the Brand to reach out to the country at large. This blog is probably my first (and hopefully last) on Brand-Bashing, but I would never appreciate such an approach. While Corporate Social Responsibility is essential in today’s scenario, there could have been other themes than Gandhi to get popular. Many Organizations undertake CSR for the heck of it without meaning it really. Fine. But please, for nobility’s sake, spare Gandhi. Let him continue to show his smiling face on picture frames and postal stamps. And let's enjoy a public holiday every year on his birthday. My sincere apologies for this insult, dear Mahatma. 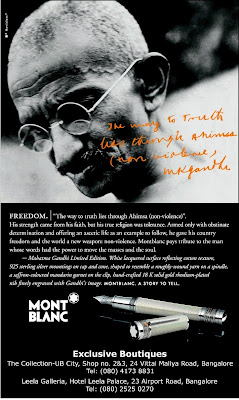