The American National Coffee Association’s “National Coffee Drinking Trends” market research survey recently found that 82 percent of American adults drink coffee, and that those who drink coffee weekly are increasingly on the rise. The survey further reveals that the average coffee consumption in the U.S. is 3.1 cups of coffee per day. And yesterday, 29th September was celebrated as “National Coffee Day” across the US. Although it is not clear who started this and from where did this concept originate, the day is revered all over the country. Most coffee chains offer freebies on this day – the list is long, but let me give some snippets... 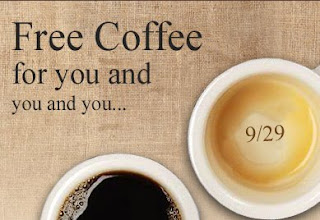 In India, to the best of my knowledge, there is no such thing (yet). It was the same with Valentine’s Day, Mother’s Day, Father’s etc. a decade ago. Also, I am unsure if we will follow something like this in future – I may be wrong. Traditionally, India has been a Tea consuming country, mostly in the North of India while Coffee has been an all time favourite in the South. This is largely because the North was always the tea growing belt (Assam and Darjeeling are world famous and even have a Geographic Indication) and coffee for South (from Chikmaglur & Coorg) – so for obvious reasons such as transportation, logistics and other factors, probably people were used to consuming a certain type of beverage (like how Rice is consumed more in the South and Wheat in the North). According to rough estimates, a family of four in Urban India consumes about 1.40 kg of coffee or tea every month – that’s two cups per person a day on weekdays with a higher frequency over the weekends. Ofcourse, we are talking about the traditional South Indian Filter Coffee or Tea that’s made using packaged tea powder, boiling water and milk. Indian Households usually do not consume Cappuccinos or Lattes or Espressos as these equipments are neither popular nor affordable in India for the time-being.

The Cafe culture started over a decade ago in India, in 1996 to be precise when a small coffee shop opened at the world famous Brigade Road in Bangalore. The outlet also had an internet centre - that’s around the time the Internet was launched in India and it used to cost over INR 60 for an hour of browsing compared to less than One Rupee an hour today (if you are in the best monthly plans). That was the beginning. Today, there are over 2,500 Cafes across the country and growing. The innovation of the Cafe culture was brought into India by Amalgamated Bean Coffee Trading Company Limited, headquartered in Chikmaglur, a nondescript yet beautiful locale on the foothills of the Western Ghats that grows most of the coffee in India, with its Head office in Bangalore. With the trade name “Cafe Coffee Day” and various other formats, the company today operates at over 810 locations and is expected to cross the 1,000 mark by next year as per media reports.

CCD as it is popularly known operates across the major Domestic and International Airports in India including “Bengaluru International Airport”, almost all the popular Malls in the country, various Offices and Establishments, IT Parks, Movie Halls and Multiplexes, Educational Institutions, Hospitals, Highways and High Streets and is also present in Pakistan and Austria. There are half-a-dozen national players in the market including Barista Lavazza, Cafe Mocha, Costa Coffee, Coffee Bean and Tea Leaf, Gloria Jeans, Illy, etc. and several regional/city-wise operators. The distinct feature among these outlets is that they provide the products and ambience of the Coffee Shops that are in Five Star Hotels but at reasonable prices with easy access. While many follow the service concept such as in Restaurants, some also follow the “take-away” model, both of which are equally popular and welcomed by consumers. The estimated market size of the Organized Coffee Outlets is approx. INR 800 Crores (USD 1 = INR 48) and has been growing at over 35% CAGR for the past few years. Starbucks, world’s largest coffee chain entered and exited India last year (due to FDI regulations) and is planning an entry soon. This makes India the fastest growing Coffee Retail market in the world. 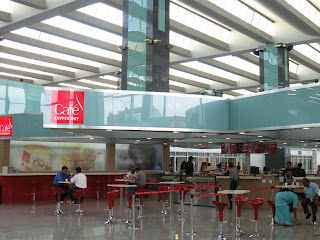 While there are over 2,500 outlets across the country, we are talking about a country of a Billion people – so even if you assume 1% of this population (10,000,000) would be the most relevant target segment, assume they would each visit a cafe once a month (10,000,000 visits in a group of say, two people) and each outlet would service 500 customers every day on an average, we would still need over 10,000 Outlets across the country to meet the growing demand. Ofcourse, these are mathematical calculations and the reality maybe a little different, but still, the opportunity is HUGE. The whole world acknowledges that India is the youngest country on earth with over half of the country’s population under 35 years of age and this is the largest consuming class. With growing incomes and salaries, opening up of several industries, and early age of employment (Avg 22 years), coffee consumption at cafes is seeing unpredictable growth across the country. From pilgrim centres like Vaishnav Devi to exotic holiday destinations like Goa, Rajasthan and Kerala, from Kashmir to Kanyakumari (the northern and southern most cities), there are coffee shops coming up all over.


The focus segment however remains the Teens and Tweens. Tweens, as I call them are those in their Twenties – from beginning to work until they are 29, their lifestyle and habits are changing so much and faster by the day. The two segments contribute over 70% of the customer base at the Cafes. The reasons for this segment to visit the cafes are varied – from pursuing their college studies, to hang around with friends, the first “date”, and as they grow up, casual meetings and business meetings, and even serious discussions. After all, “A lot can happen over coffee!” In my case, a lot has happened. What about yours? If you are a teen or a tween or any one of those at heart, rush to the nearest cafe, and by popularity, most probably your choice would a Cafe Coffee Day. In India, we believe everyday is a coffee day. Cheers. 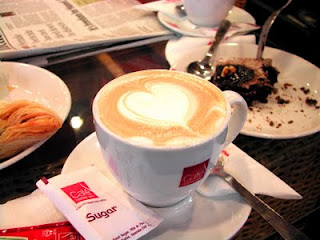