Nipping in the Bud

Most of us were watching closely the developments on the recent strike called for by the pilots of Jet Airways, India’s most respected and the oldest private airline which recently celebrated its 12th Anniversary. Over 600 pilots reported sick – various forms of disorders from mild headaches to nausea to even diarrhea on a Tuesday morning until the impasse was broken and a final accord reached the following Saturday. As per IATA guidelines, a sick pilot (If he/she claims to be) is unfit to fly and this method was adopted by the pilots to show their protest against the sacking of some of their colleagues. The issue why the pilots were sacked was forming “National Aviation Guild”, a body of pilots from the airline that would coordinate a number of activities for their members which would include liaising with the management on various issues, the Government bodies and other agencies and to provide support and relief in times of emergencies or need. Clearly, it was similar to a Union if one looks at it that way. At the face of it, it looks fine – after all, Unionism was a way of collective living!

Naah. That’s not the way the Airline Management looked at the issue. The company plans to raise funds very soon for sustaining and expanding their business and investors would be weary to put their money in a company that has a large Union voice. Apparently, there are other reasons why the Management didn’t want a union set-up which continue to remain confidential. What started as a face-off emerged into the darkest times for the company and its visionary Chairman, Mr. Naresh Goyal. He was always known for his surprise decisions, but were mostly in the interest of the company – be it buying out the erstwhile Sahara Airways or sacking and immediately reinstating the next day over 2,000 crew members who were on probation or forging a strategic alliance with rival Kingfisher Airlines or cutting over 60% of its regular flights into a new avtar, Jet Konnect, a low cost no-frill airline, that has helped the company save lots of money. While commenting on this issue, he even said that he doesn’t mind closing the airline but wouldn’t take such steps that are not in the best mutual interest for all concerned. Rightly said, I guess. 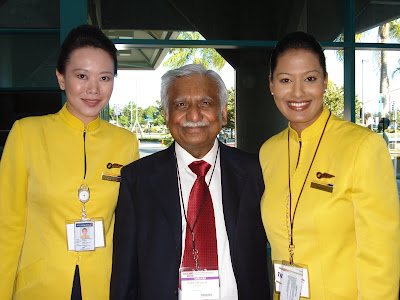 The result of this unsavory drama was a lot of time and money lost that cost the company Crores of rupees as operating losses (especially during the current times when the Indian aviation industry is already under serious pressure due to lack of adequate revenues). And to set things right, the airline took advertisements on major dailies to communicate to their key target segment that they are now back in action. Most of us around just wondered – would this do away the negative feelings associated with the once “most trusted” Indian airline brand? Would consumers (passengers) shy away from this airline due to this episode?

Probably, not in India. As a race, I believe we are a set of people who move on, and quite quickly in that. Be it personal or political or social or even international issues, we do not take it to our heart and mull over for too long. Let me share an example. There was once this small retail store in a nonchalant location called Mandaveli in South Madras, which sold many household products including grocery at cheaper prices. The pricing was similar to that of the Govt. owned PDS, but the products sold were of superior quality and a new shopping experience that Madrasis (like my family and I) were not used to. And then, the Retailer grew bigger and bigger, from one city to another and from one state to another. And then the IPO and some external funding. And suddenly, it was a behemoth – by size, as well as debt burdens. Unable to pay the vendors’ dues on time, employee’s salaries on time and the bank’s interest on time, and finally, one day, it had to shut shop. It was so closely associated with the burgeoning modern retail in India, but after six months of its closure, many consumers do not remember the retailer anymore. They had some of the best locations and are now taken over by fellow retailers or someone else for some other purposes.

The case in address is similar and interesting from a Retail perspective. Jet was fighting fire every time in the past with a small extinguisher rather than resolving the source of its problem. There were a multitude of reasons for its employees, mainly pilot’s resentment. Every time an issue came up, some key personnel from both sides would get into a room and resolve the same. And everything was normal the next morning. Until hell broke loose.

Many of my colleagues in the Indian Retail Industry today would agree that it’s the same across many retail organizations. There was a possible formation of a Union backed by a regional heavyweight in Western India a few years back. The promoter whose direct political lineage is almost nil, somehow managed this well. But this could emerge once again, sooner than later, if not in the same city, elsewhere. With Retailers demanding an Industry status and already employing a sizeable number of the population, which is expected to cover over 15% of India’s population over the next seven years, this is only set to become a bigger virus sooner than later. Once again, I am not averse or against the formation of a Union or a Body – as long as it helps to achieves superior Customer Service. I have always advocated that highest standards of customer service can be/ and would be achieved only by taking care of the employees, especially those at the front-end. Many would agree, “If we don’t take care of our employees, someone else will’.

The recent Jet saga is a great anecdote for us. For something that should never happen again in India. Imagine any one of India’s leading Retailer shutting shop for a few days when its employees go on strike! No customer would ever return, as they would not want to be shopping in an environment that’s not conducive. We, the Retailers must be thanking M/s X, Y, Z, A, B and whoever lead the pilots to strike work (for their ulterior motives). Something that must be nipped in the bud by Retailers – you would only agree with me that no amount of advertising would help, and by the way, the banks wouldn’t be lending to take such advertisements anyway.