Time is the enemy; Add to that staff attitude…

I was reading this morning (Fri. 19th Mar. 2010) on a newspaper that food inflation in India is at a four month low – at 16.30% to be precise. Well, it was on a negative decimal ten months back and everyone was crying recession/slowdown etc. All of a sudden, things are on top gear – as much as it was racing in early 2006. The Economy in general is back in action, real estate prices are steadily rising and companies are announcing bigger hikes and bonuses; Banks are happily releasing home/auto/personal loans and “consumption” seems to have increased over all. My friends in Fashion Retail and large-format Department Stores are gung-ho that the new season launches have been well appreciated (in spite of Discounting being the norm over the past 12 months across formats). Restaurants, Bars and cafes are seeing more consumers and so are Multiplexes (except the last week since the IPL frenzy). Now that I travel 3 days a week, 3 times a month, one of the most important positive impacts that I have personally witnessed is at the Airports. Inland Passenger numbers have grown between 25-32% (YoY) across large Indian airports at Delhi, Mumbai, Chennai and Bangalore and planes are running full. Ticket prices have increased by about 10-15% on an average since Dec. 2009 although passengers seem to be flying more often than ever. Some Airport terminals look like crowded bus stations (although orderly and very well managed) and the aircraft itself looks like a bus in some angles (sic)… 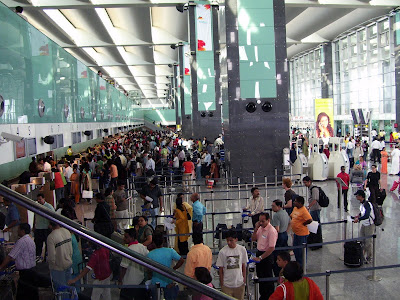 Ask any Retailer at the airport on the business impact and many are not smiling. Reason: More passengers doesn’t necessarily mean more revenues although the potential cannot be neglected. The main reason for this is the lack of “dwell time”. Dwell time is the idle or disposable time that pax have at airports between the processes such as Ticket & Baggage Check-In, Security Check and Boarding. In India, during domestic flights, pax are advised to report at the airport atleast 90 mins before departure. While most frequent travelers report not before 50-60 mins, many actually reach the airport ahead of time. The average dwell time for Domestic pax. is between 20-30 minutes. Most of this time is spent within the Security Hold Area (SHA) which is also the waiting area after Security Check. However, due to excessive crowds at various process points, the dwell time has actually reduced over the past months. That means, the disposable time has reduced considerably since pax are waiting in various Queues – at check-in, security and boarding gates.
The main reason for this is the airport capacity handling – the number of support systems that are required optimally (utopian!). The first Q that one encounters is at the entrance of the Terminal building where the CISF staffs (who manage security installations at all Indian Airports) check every person’s ticket and their identity. That a piece of printed paper can be forged is not taken into consideration although an Identity card such as a Driving License, Pan Card, etc is insisted. The next Q is at Airline check-in counter. Full Service Carriers have as many as 8-10 counters each while the low cost airlines manage with 4-5. At major airports in Mumbai, Delhi and Bangalore, for a peak passenger strength of over 6,000 pax during peak hours (05.00-08.00 hrs and 18.00 – 21.00 hrs), there are not more than 10-12 security booths and thereby, the waiting time in the queue is considerably long. By the time the passenger reaches the SHA, it’s already boarding time… Assuming that a passenger reaches 75 mins in advance, spends 5 mins at the Main Entrance, 15 mins at the Airline Check-In, 30 mins at the Security Check, what’s left over is only 25 minutes, out of which 10 minutes is spent in the boarding Q, 5 minutes to reach the aircraft by bus and 5 minutes inside the aircraft settling down. So where is the opportunity to shop and eat? No answers, unfortunately at this time. 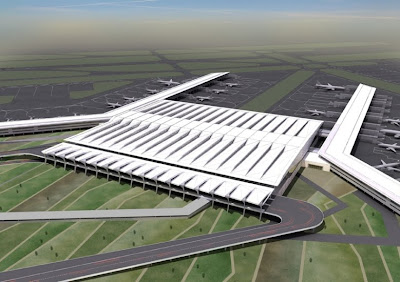 Delhi is awaiting a new Terminal in the next four months and Mumbai will commence using the newly constructed terminal in the next few weeks. Chennai is already gearing up for a new integrated terminal that would be operational by end of this year. Bengaluru International Airport (in which the GVK Group acquired a strategic stake recently and also manages Mumbai airport) will expand its existing Terminal building in months to come. Given this scenario, what is the respite to increase the commercial opportunity at the Airports? I would say, Attitude. There needs to be a cohesive approach between the Airports and their stakeholders such as the Airlines, Security agencies, and all the staff who work at the precincts. I was recently stunned by an encounter at the Delhi Airport. I was flying the country’s oldest private airline to Bangalore and had already finished my web-check early morning. Usually there is a baggage drop facility offered by this airline that is available for such passengers – it is more of a convenience to pax and the airlines than a privilege and I have been doing this often. This time, when I approached the counter, there didn’t seem to be any orderliness with over a dozen people standing confused in a specially created Q by themselves. When I approached the Senior Staff (who was distinct to find as she was wearing a different uniform), she smiled and said “Sorry Sir, we don’t have such a facility”. When I quizzed more, she said it was due to the Airport infrastructure. Indeed, she was not saying the true stuff. While there were over 10 counters, only half that number was working (it was a Friday, 18.00 hrs peak time). There were atleast 40 people in Q waiting for their turn to check-in. What was stunning was the blatant lie by the Airline staff. Having worked in an airport earlier, I know what it means when it comes to Airport infrastructure. But such an attitude by a senior staff was disturbing. 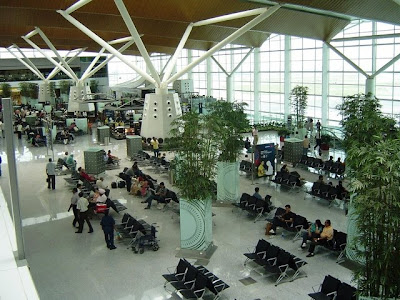 Ironically, in the same morning newspaper, I was reading an initiative by the Delhi Chief Minister ahead of the upcoming Commonwealth Games – to urge citizens of Delhi to be polite and less aggressive as they have been. And many comments around the article that before a system can be changed, people’s attitudes must be changed. How true…

The airline staff didn’t realize that her lackadaisical attitude would affect her own earnings in future. Let me tell you how. Airports are trying their best to increase the commercial revenues so the same could be compensated to the airlines for their high costs. These measures take 3-5 years to be implemented and airports such as the ones at Singapore, Bangkok, Hong Kong, Zurich, Dubai, etc. have actually proven this in the past. The lower costs to the airlines mean savings, which is passed on to passengers on their tickets and staff on their earnings. Ask those who work in airlines for the above mentioned airports and they would vouch for this. Ever wondered how a return ticket from Bangalore or Mumbai to Dubai or Singapore is cheaper than a return flight within the country – this is how.

Staff Attitude needs to change. Airlines and Security Staff have to realize that it is not just important to be personally efficient but also make the airport environment friendly and profitable. Some need training; some need sympathy. Let’s hope.