It has been the talk of the town for sometime now, the new BlackBerry Playbook, the tablet from Research In Motion.There are thousands of reviews online and I am not going to delve into it for now. I got my hands on it three weeks back (even before it was launched in India) when a friend of mine who had brought it from the US showed it to me. Pretty engaging stuff, with its plusses and drawbacks. But what interested me to analyse and write this column was an email which I received a weeks back from EZone, India’s largest electronics store from The Future Group. There were actually two, one for a pre-booking and another stating that the wait was over and the Playbook™ is Finally Here. Am sure the mailer would have gone to hundreds, or maybe thousands of email accounts and would have pulled quite a few to the store over the past few days. I myself visited a few stores of EZone and Croma (TRENT Enterprises, part of the TATA Group) over the past few days and the results were amazing! Of the six different stores that I went to in Bangalore, two didn’t have stocks – I was informed by the sales executive that the “Catchment” for that store was not expected to explore Tablets! Another store had just the Playbook and an iPad, there were no other Tablets from any other Brand. And at one of the largest showrooms of one of the Retailers, there were crowds across the store in every section and surprisingly, there was no staff to attend the curious seekers at the area that stocked “Tablets” although there were atleast 6 different brands which were available.  Shoppers explored themselves (none of them were functional since WiFi was not connected) and moved on – one could imagine how many “Tablets” they would have sold today! 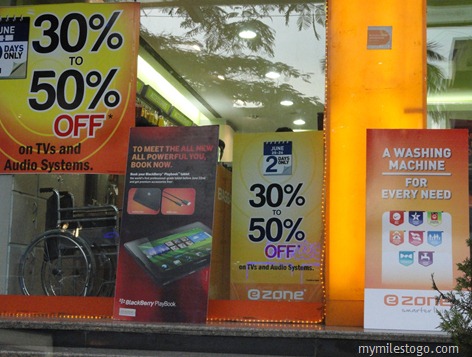 Elsewhere in the world, in the US, you can collect boatloads of kicks™ in the kicks Reward Program and unlock awesome exclusive deals at your favourite stores. Walk into Target, Best Buy, Macy's, American Eagle, Sports Authority, Crate&Barrel, West Elm, Wet Seal and the largest Simon malls. Open the Shopkick™ app on your iPhone or Android phone in the entrance area, and wait for a few seconds. That's it! Your Shopkick app will reward you instantly. It's fun. You can get rewards at all 1,300 Best Buy and Best Buy Mobile stores in the United States, and at all Crate&Barrel and West Elm stores! And in many major cities you will find more stores with walk-in rewards, like Target, Macy's, American Eagle, Sports Authority Wet Seal and Simon Malls. Shopkick is adding more stores in more cities every month. Cool rewards like iTunes gift cards, Restaurant vouchers, Best Buy/Target/Macy's/American Eagle/Sports Authority gift cards, Facebook Credits, movie tickets, or if you go all out, True Religion jeans, a Coach handbag, or a 3D 55" Sony Bravia HDTV. And if you want to change the world, donate your kicks to 30 different causes! And all this, just to woo shoppers to walk into a Retail Store!

Look at the contrast. In one country, there are not enough sales staff to manage shoppers and potential customers who walk into the store. And in another scenario where shoppers are “paid” to just visit the stores! According to the Shopkick program, as you walk into the stores, there are specific sections where you get higher kicks™ and one can keep accumulating them. There are also certain products, which by mere scanning fetches additional kicks. I did try to download the Android app in my phone, but I got a message that the app was not applicable in my country!

What makes me wonder, is how Retailers need to woo shoppers to walk-in to their stores and convert them into buyers. While the first part is not so difficult in India – with less than 10% of the Retail Industry being organized, and there is no dearth of footfalls walking into Retail formats, it is indeed important for Retailers to focus on;
Sales are happening despite these, but its just a matter of time for shoppers to move to alternative avenues for shopping. An ASSOCHAM Report suggests that the expected market size of online shopping in India is about USD 2 Billion pa. Forget shoppers walking off to neighbouring stores, they may be shopping on their mobile phones and tablets sitting at the favourite Coffee Day outlets! And then, I would be writing a column on that trend, from a cafe indeed!
at July 03, 2011