A former colleague of mine, a Swiss gentleman once quipped that everyday in India is a festival day! Well, he was right in a way, maybe not quite literally though. With so many religions and diverse cultures, indeed every day may have some form of festival in India…

This October month is one of those rare ones – that benefit Grocery Retailers, typically supermarket and hypermarket chains like Food Bazaar, Reliance, Spencer's, More, SPAR, EasyDay and others. Navaratri / Dasera, which commenced on 27th Sep continues into the first week of October and Diwali will be celebrated during the last week of the month. Typically, the monthly Grocery shopping happens once a month, usually in the last week of the month gone by or during the first week of the current month. But in this case, families would have to shop twice, and probably more quantities than usual – roughly 1.5 to 2 times the average quantities. Navaratri is celebrated in different forms and signify different things for people across the country. in Tamil Nadu, Andhra and Karnataka, families set-up dolls at home – popularly known as the “Kolu”. During this period, Goddesses Durga, Lakshmi and Saraswati are prayed and celebrated three days each. Every evening, women folk and children visit houses of neighbours and are fed with “sundal” – the nine grains, one each every day. Now – this category is shopped for extensively before the festival commences which may not be consumed so much otherwise through the year. Also, the visitors are gifted small household articles usually made of plastic and this category also sees an increase in sales during the period. Fruits, which are distributed benevolently, see a surge in price and hence consumers prefer shopping at Supermarkets and Hypermarkets for a better bargain. 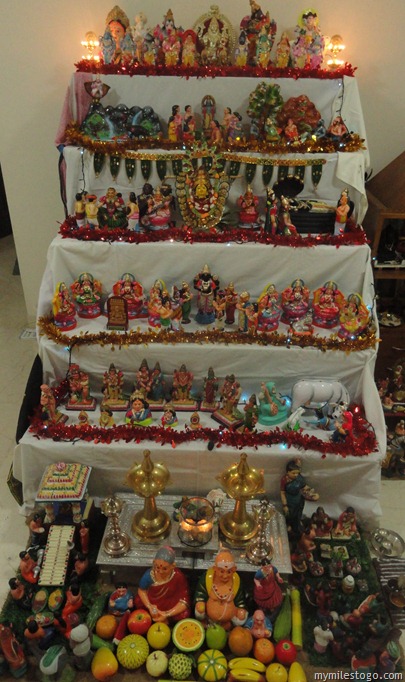 In Gujarat and West Bengal, it is more a societal occasion. While Hindus celebrate it the most, people across all walks of life join into the celebrations. While “Dandiya” – an art form of dance is the most happening one in Gujarat, the Bengalis install huge “Pandals” which showcase Goddess Durga in different forms. People visit Pandals day and night and wear new clothes (in Bengal) while late evening Dandiya sessions are regular during the week. And obviously, new clothes are something that every one looks forward to! Even Western / Foreign brands (like Benetton seen below) join in the festivities by promoting themselves during this period.

Just around the corner is Diwali – the festival of lights and the biggest grosser for Retailers across categories. This festival is also celebrated in its unique way across the country. While families shop for Electronics and Gadgets, Home Furniture, Clothing and Accessories, sweets for distribution and consumption is a big hit too. Retailers and Brands have already started advertising for the ensuing Diwali as well and is expected to step up their promotions starting this weekend.

If there is one category that sees a low, it’s liquor and alcoholic beverages. People generally refrain from visiting bars / consuming such beverages due to the ensuing festivities but things are indeed changing. And hopefully, this category will support Retailers in November which is expected to be one of the lowest months  for business since there are not major festivals (duh) until the Christmas season commences. Anyway, wishing each one of you Seasons’ Greetings and of course, Happy Shopping!