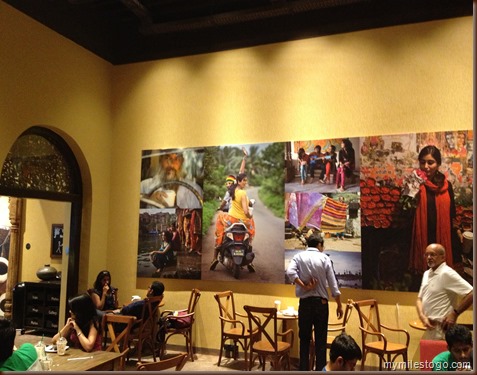 I was at the Starbucks (SBUX) outlet in South Mumbai a few days ago. SBUX, in a JV with the Tata Group  opened their first outlet in India in South Mumbai a couple of months ago. We had a long day ahead and decided to start our first meeting at this location for the sheer purpose of convenience. And ofcourse, some good coffee. Not awesome coffee, atleast for me. For which I would go back to Café Coffee Day, India’s largest café chain with over 1,400 outlets across the country which in my opinion still brews the best coffee in town despite lapses in service levels here and there once in a while. I was pleasantly surprised that the SBUX outlet offers complimentary wifi to those who wish to have a sip or grab a bite and spend time around at their cafe. Ofcourse, for me it wasn’t the reason why I chose my meeting venue there. But then, anything complimentary is welcome in this mean world, I say. So there I was, connecting all my three devices – the laptop, the iPadmini and the iPhone on wifi sponsored by Tata Communications (I felt it was a great marketing opportunity for them although they didn’t seem to use it as well as they could). I was online for over half an hour, finished my emails for the morning and was all ready to step out for my next meeting. The staff at SBUX, as friendly as they were, cheered every customer who walked in or walked out with a customary welcome or thank you respectively. Even as I was walking out, I wondered how happy I was as a customer using complimentary wifi at the café. I have a USB Data Card for my laptop, 3G for my iPadmini and iPhone. But then, its sheer convenience and speed to use wifi.

I have been extensively travelling since Aug. 2012, ever since I joined Royal Enfield where I am responsible for Dealer Development and expansion of other key pet projects for the company. I book my hotels myself, mostly on my Make My Trip Mobile App for the iPhone or on their website although the former is quicker and handy. While most of the hotels provide complimentary wifi in their rooms, only a few work seamlessly. It is usually patchy and the front office staff are usually unable to resolve the connectivity issue blaming it either on the service provider or sometimes on my device! (Yes, at a Delhi hotel, the staff claimed my iPadmini was faulty). These days I look for reviews on sites like Trip Advisor while choosing a hotel that provides complimentary wifi. And most reviews are correct and genuine, as I have experienced.

That set me thinking, what if other Retailers provide Wifi to their customers. Would it bring additional walk-ins? Would it increase the stickiness? Would shoppers be showrooming – a term used for browsing the store for products and buying them simultaneously online, thereby increasing ECommerce? If so, would it help Retailers like Shoppers Stop and Landmark Book Stores which have a strong offline/online connect? I guess there are no immediate answers. Large Department Stores in the West have a café within their store so bored husbands and boyfriends could have a cup of coffee or a mug of beer while their wives/girlfriends are shopping. These days, my friends who live in the West tell me that Wifi is almost free everywhere around, which prompts them to choose a location for their need – be it a restaurant, a café , a book store or any other format of Retail. In India, unlike in the West internet bandwidth is minimal and the speed is not all that great. Cost wise too, it isn’t worthy for most Retailers to offer it free especially for those shoppers who just pass by and not really spend at their stores. Bangalore International Airport, where I worked many years ago was the first airport in India to offer free wifi for one hour to passengers passing through the airport. And most airports in India follow the trend albeit for a shorter duration. Atleast, large Indian Retailers should try this concept. With increased penetration of smartphones and tablets, there is abundance usage of data these days. Lousy 3G speeds by most Indian mobile networks mean an alternative connectivity which is what wifi is all about. Facebook and Twitter updates by the minute are not uncommon for those who are hooked on to their devices.

It’s just a matter of time that free wifi would become the thing of the day. Even now, I am sitting at another airport lounge while transiting from one city to another. And yes, this article would be published using the free wifi. Stickiness, I would say that I visit the lounge as often as I could, and just because of the complimentary boring food. If only the Lounge was more exciting with various marketing promotions other than the TV which is blaring music and bollywood gossip from one leading Indian channel just because they probably provide free Televisions!